Platter of cheese being served at a fromagerie 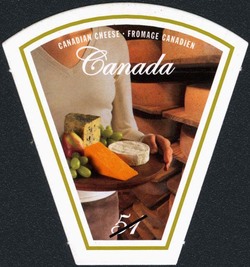 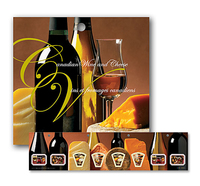 Nothing defines a nation's cultural vibrancy as poignantly as the senses: the sights, the sounds, the unfamiliar scents, the feel of a cobble-stoned path underfoot. Arguably the most impressionable of all is the sense of taste. How fitting then to pay tribute to two of Canada's internationally acclaimed palate-pleasers -- wine and cheese -- with four elegant stamps.

Winemaking is believed to have originated in the Neolithic period in Mesopotamia. Over the centuries, the practice gradually meandered across Europe and the Atlantic, reaching Canada in 1811. In the last 25 years, Canadian wine has stepped onto the world stage. Today, there are some 170 Canadian wineries, many of which have won international awards and earned renown, especially for the exceptional quality of their ice wines.

With most of its mainland lying north of 50 degrees latitude, Canada's climate and growing conditions are particularly favourable to the unconventional production of ice wine. The harvest is done entirely by hand once temperatures have dropped below -10° C and the grapes have frozen naturally on the vine. Today, Canada is the largest producer of this sweet "dessert in a glass." Our nation's crisp whites are almost as famous, and new strides are being made every year with the complex personalities of Canadian reds.

Fertile vineyards -- heavily concentrated in Ontario and British Columbia -- have soils and climates similar to the Champagne region of France and the Chianti Classico region of Italy. These mixed conditions and others across the country also yield uniquely Canadian cheese variations that share a storied history dating back to the 17th century.

It's believed that Samuel de Champlain introduced the first herd of Norman cattle to New France between 1608 and 1610. Soon thereafter, French colonists began to make cheese using ancestral recipes and traditions. When the British arrived in 1783, they introduced traditional English methods of making cheddar. And, in the late 19th century, Benedictine monks at Oka, Quebec, started to make a cheese whose reputation for excellence spread quickly and endures to this day. Oka, Canada's best-known distinctive cheese other than cheddar, is sought after around the world for its pleasantly pungent, sweet-savory aroma and creamy, full flavour.

Four pairs of domestic rate (51¢) stamps, designed by Derwyn Goodall, depict elements of Canada's wine and cheese industries with a rich and tasteful look. "The challenge," says Goodall, "was to create something unique with a classic artistic feel. We went to Quebec fromageries and toured wineries in the Niagara district. In many cases, labelling was part of the visual language of product presentation, and so became the impetus behind our design approach."

Shaped as cheese wedges or wine labels, two of the four stamps are situational compositions that blend location and studio shots to create images that appear as though they are in one place. These include the scene of a barrel cellar with a taster sampling wares, and a platter of cheese being served at a fromagerie. The other two stamps showcase Canadian wine and cheese products. Photographer Robert Wigington worked with accessories of the wine and cheese industries to create an elegant look that toasts Canada's hearty cultural heritage.