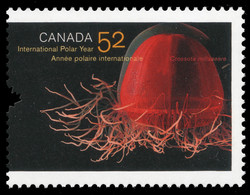 The hidden date for this stamp can be found on the jellyfish. This stamp has half of a maple leaf perforation pin along the left edge of the stamp. When attached to its sibling stamp, the perforation displays a full maple leaf, which is pictured below. 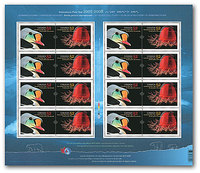 Bleak and barren, yet arresting in its stunning starkness, the northern polar region of our Earth is a window into the past and a barometer reading of our future. Not many nations claim polar territory in their makeup. As stewards of this eco-treasure, our country has a responsibility to inspire other nations to warm up to the realities of climate change and protect the fragile splendour of this magnificent world within our own.

On February 12, eight countries will issue identical-sized souvenir sheets to inform people about the sensitivity of our northern environment-and to mark the advent of the 2007 International Polar Year (IPY).

Canada's own International Polar Year stamp release has tremendous collector appeal on several fronts. This is the first-ever Canadian issue offered in gutter strip format. The centre two rows from a pane of 16 include the colour bar, which runs parallel between the block of stamps and appears in the form of a thermometer. The Tullis Russell paper code is creatively applied as a Celsius figure. To convey the Canadian connection in this international venture, a maple leaf perforation pin features prominently in the design-only the second time this unique element has been used. The first was in the Canada/China Big Cats joint issue.

"When we think about climate change, we think about its impact on us rather than the impact on other creatures," says Peter Scott of Toronto's q30 design inc., the firm that designed Canada's pair of 2007 International Polar Year stamps. "The polar region is teeming with life. The images in this issue, designed by Gildo Martino, depict true Arctic dwellers."

One stamp shows a brilliant-red deep-sea jellyfish, the Crossota millsaeare, a species that was just recently discovered on a subarctic polar expedition. The jellyfish appears in actual size-about the size of your thumb.

The second stamp features a male king eider with a bright orange bill, light grey crown and pale emerald green cheeks. The king eider is considered circumpolar. Native to Canada, Alaska and Greenland, its migratory patterns are being studied as part of the 2007/08 IPY.

As a northern nation, Canada and its indigenous people share a distinct responsibility for the polar region. All elements comprised in this issue, including the pane of 16 se-tenant stamps, souvenir sheet and official first day cover (OFDC), feature text in English, French and Inuktitut. The OFDC also bears a unique cancellation from Nunavut.

Canadian firsts!
With the introduction of a new gutter strip format, design considerations had to address trim lines and typography arrangement. Colour coding and crediting was placed in the centre of the pane rather than on the outside selvedge.