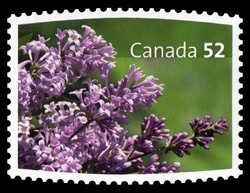 Keeping an eye on the trees and plants at the Central Experimental Farm is a normal part of Pierre Huppé's daily routine. Huppé is a supervisor of grounds maintenance at the Central Experimental Farm in Ottawa, Ontario. When Canada Post decided to respond to the tremendous success of the Daffodils and Gardens stamp issues and welcome spring 2007 with two domestic rate (52¢) stamps featuring the fragrant lilac, Stamp Services turned to the Farm-and Pierre-for help.

"We wanted two typically Canadian lilacs for these stamps," explains Danielle Trottier, Manager of Stamp Design and Production at Canada Post. "So we chose the white Syringa vulgaris 'Princess Alexandra' and the Syringa x prestoniae 'Isabella', which is pale purple."

Cultivated in 1874 by James Dougall of Windsor, Ontario, the 'Princess Alexandra' was one of the first lilacs to be planted in Canada. Dougall was the first person in North America to originate lilac cultivars and named his hybrid after Alexandra, the Queen-consort of King Edward VII.

The 'Isabella' was originated in 1927 by Isabella Preston, a plant hybridizer at the Central Experimental Farm. Preston started hybridizing lilacs in the hope of obtaining attractive, hardy, lateblooming Canadian lilacs. She began her work in 1920 by crossing two wild species from China: S. komarowii subsp. reflexa and S. villosa. The resulting hybrid-the 'Isabella'-blooms from late May to mid June.

Once the lilacs for the stamps had been chosen, it was up to Pierre Huppé and his staff to watch for the first signs of flowering so that stamp designer Isabelle Toussaint could capture the lilac blossoms in their full glory.

"The Central Experimental Farm has more than 700 lilacs-among the largest collection in Canada," says Huppé. "The 'Princess Alexandra' lilac featured on the stamp is the oldest Canadian hybrid lilac at the Farm. My staff and I-and especially Sharon Saunders, the lead gardener in the ornamental gardens at the Farm-visited this lilac and the 'Isabella' selected for the second stamp, and provided regular updates to Canada Post about how close they were to flowering."

Huppé's visits to the trees became more frequent as first the 'Princess Alexandra' and then the 'Isabella' showed signs of blooming. He and Saunders watched closely to determine when the flowers would be at their very best. "That's when I was called," says designer Isabelle Toussaint. "I wanted a completely natural photograph, using natural light that would show these gorgeous lilacs in all their glory."

Photographing the 'Isabella' went according to plan. However, when the earlier-blooming 'Princess Alexandra' was at its most beautiful, the weather wasn't, leaving Toussaint wondering if she would be able to photograph the flowers without resorting to artificial light.

"The blooming season was ending," says Toussaint. "And it had been raining for a week. There wasn't an inch of blue sky to be seen. I had reluctantly started to shoot using artificial light when the clouds suddenly parted and the sun came out."

The ten minutes of sunshine Toussaint had that day were enough to capture a gorgeous picture that, along with the photo of the 'Isabella', enabled her to create two stamps on which the lilacs are so rich and lush you can almost smell them.