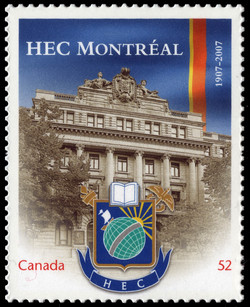 The hidden date for this stamp can be found along the right edge of the stamp near the top of the building. What do ex-Premier of Quebec Jacques Parizeau, Chief Financial Officer of the Cirque du Soleil Robert L. Blain, and President and Chief Executive Officer of Rona Robert Dutton have in common? They're all alumni of the École des hautes études commerciales of Montréal (HEC Montréal), Canada's first business school, which celebrates its 100th birthday in 2007.

To honour this historic anniversary, on March 14, 2007, Canada Post will issue a commemorative domestic rate (52¢) stamp.

When the Act incorporating HEC Montréal received Royal assent on March 14, 1907, it was the culmination of a train of events that had been set in motion 20 years earlier by member of the Quebec national assembly Joseph-Xavier Perreault. Perreault was supported by Ottawa MP Honoré Gervais, Quebec Premier Lomer Gouin and the Chambre de commerce de Montréal. The latter contributed $5,000 per year to fund the school. HEC Montréal was modeled after European institutions and was independent of any university-a first not only in Canada but in all of North America.

The school's original building was situated on Viger Square, and was built in a style inspired by the Petit Palais in Paris. Since then, two new buildings and a new campus have been added, but it was the original Viger Square building that Montréal designer Denis L'Allier and photographer Guy Lavigueur decided to use for the HEC Montréal stamp. Photographing the building though was not a simple task.

"Each university design has presented its own unique challenges," explains L'Allier, who, over the years, has created nine stamps featuring Canadian universities. "The challenge with HEC Montréal was in photographing an urban campus. The building's architecture is superb, but space is limited and there was basically only one angle from which we could shoot."

L'Allier eventually managed to achieve the beautiful image used on the stamp by photographing early in the morning to ensure that no passersby accidentally wandered into the shot. Railings, parking meters and garbage cans were edited from the photograph afterwards. The design is completed by the school's logo and colours to create a unique stamp that is worthy of the school.

"HEC Montréal has a 100-year history of innovative achievements that are quite rightly a source of pride for the school's 12,000 students, staff and alumni," says Danielle Trottier, Manager of Stamp Design and Production at Canada Post. "Among other things, the school was the first in Canada to make evening classes available to adults, and was the first in North America to hold three accreditations: the AACSB International, EQUIS and AMBA."