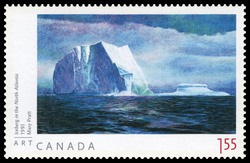 The hidden date for this stamp can be found just above the water on the left side of the iceburg. Known for her perceptive depiction of light and the themes of domestic life, one of Canada's most respected realist painters is being honoured in the next release of Canada Post's Art Canada series.

To achieve the effect of her photorealism pieces, such as "Jelly Shelf" shown in this Canada Post stamp issue, Pratt carefully eliminates any traces of brushstrokes through a painstaking process that involves using small sable brushes and painting cross-hatched strokes with a mix of turpentine and Liquin. Like other Canadian, American and European New Realist artists, she often works from slides.

Her subject matter, however, remains uniquely hers and is heavily focused on things found in the kitchen of her home in St. John's, Newfoundland and Labrador. When asked by Canada Post whether she thought that she'd transformed the images of the domestic sphere into the subjects of serious art, Pratt replied: "They are serious art, the things women handle every day-the fruit, the jars, the jelly. [...] My role seems to have been to make people see things that are around them all the time that they never noticed before... to help them find the beauty of the simple things. I think that, in the past, people have not given enough weight to the images that women see. We have to eat. Food is important."

Other work, such as her Bonfire series and "Iceberg in the North Atlantic," which is also featured in this Canada Post stamp issue, depart from the more intimate domestic sphere. Representing both a departure from theme and technique, "Iceberg in the North Atlantic," hangs in the Canadian Embassy in Washington, D.C. Pratt explains that "I had to have both hips replaced and it's almost impossible to stand and paint and twist with a cane, so I began to do a series of great big mixed media pieces. [...] I painted much of Iceberg with a Windex bottle filled with blue paint-I learned this technique by myself-for the snow, the escarpment."

Now in her early seventies, this grandmother still paints regularly and maintains a humble perspective on her artistic achievement-"I just paint things that are beautiful to me."

To learn more about this fascinating Canadian artist and her work:

The Substance of Light: The Art of Mary Pratt, by Tom Smart
Goose Lane Editions, 1995