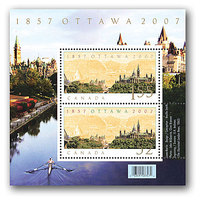 There are many stories about how Queen Victoria chose Ottawa to be the common capital for what was then the province of Canada. Some tales have her making the choice by sticking a hatpin into a map; others that she liked watercolour paintings she had seen of the area. While these stories seem to have little or no basis in historical fact, they do illustrate how arbitrary the choice of Ottawa seemed to Canadians at the time. Today, Ottawa is a major metropolis and Canada's fourth largest city, but, in 1857, when it was chosen to be Canada's capital, it was a small, rough and sometimes violent lumber town in the middle of nowhere, far away from the main cities of Québec and Montréal in Lower Canada, and Kingston and Toronto in Upper Canada.

Although the choice seemed arbitrary, Queen Victoria's advisors probably recommended that she select Ottawa for a number of important reasons, including the fact that it was located on the border of Upper and Lower Canada. This made the town, which also had a bilingual population, an excellent compromise between the two colonies and their French and English residents. Ottawa officially became the capital of the province of Canada on December 31, 1857. Ten years later, in 1867, it became the capital of what was then called the Dominion of Canada.

On May 3, 2007, Canada Post will issue two stamps-one at the domestic rate (52¢) and one at the international rate ($1.55)-to celebrate Ottawa's 150th birthday as our great nation's capital.

The stamps' design uses two images to create a sense of Ottawa "then" and "now". A contemporary photograph of the Parliament Buildings shows Ottawa as it is today, with an image of a lumberers' regatta showing how Ottawa would have looked 150 years ago. This image was taken from an old copy of an engraving that was made from a drawing by G.H. Andrews of the Lumberers Regatta that was held as part of a reception in 1860 for Queen Victoria's eldest son, Albert, Prince of Wales. The Prince was visiting the newly created capital to lay the cornerstone of the soon-to-be-constructed Parliament Buildings.

"The feeling of ancient and modern within the design of the stamps is enhanced by depicting the Parliament Buildings in bright summer colours, while the regatta is shown in more muted, sepia tones," says Liz Wong, manager of Stamp Design and Production at Canada Post. "The result is a stamp design that is gracefully elegant and beautifully symbolizes our capital city's 150-year history."

The international rate stamp on the souvenir sheet, which comprises both stamps, is beautifully embossed and enhanced with elaborate gold foil to further symbolize Ottawa's royal beginnings and rich heritage.

"Ottawa has grown from a small settlement named for Colonel John By, the engineer who oversaw construction of the Rideau Canal, into a dynamic modern city," says Wong. "The canal is the nucleus around which the city grew, and it remains a main attraction of our nation's capital, which is why it's featured prominently on the souvenir sheet and the stamp booklet."