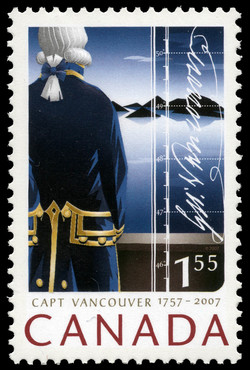 The hidden date for this stamp can be found above the denomination value. The image of Captain Vancouver is embossed onto the stamp. The first hint of Captain George Vancouver's desire to make history probably came when he was an ambitious 16-year-old seaman serving on Captain James Cook's ship, the Resolution, during Cook's second great voyage. Cook sailed with the intention of determining whether an Antarctic continent really existed by exploring the Antarctic region and the South Pacific. Just before Resolution turned north after having sailed as far south as was possible, Vancouver climbed the bowsprit, leaned out over the Antarctic sea toward the polar ice, and established his claim of having been "nearer the south pole than any other man." By his mid-twenties, he had narrowly escaped death on the island of Hawaii (the day before Captain James Cook was killed on the same island), sailed the world twice and gained his first commission.

As captain of the Discovery, Vancouver is credited with undertaking the last of the great voyages of exploration embarked upon by 18th century European sailors. During this expedition, he oversaw the return of British territory and property from the Spanish at Nootka and created the first accurate map of the northwest Pacific coast, exploring from the tip of Vancouver Island to the southern end of the Alaska panhandle. He bestowed almost 400 place names that are still used today, including the largest island on the west coast of North America and Canada's largest west-coast city, which both carry the name Vancouver.

To celebrate the 250th anniversary of Captain Vancouver's birth and honour his accomplishments, on June 22, 2007, Canada Post will issue a single international rate ($1.55) stamp.

"The importance of Vancouver's achievements, which went largely unnoticed until after his death, have significant bearing in today's world," explains stamp designer Niko Potton of Fleming Design in Vancouver. "Despite being a long way from home and being treated poorly by the admiralty upon his return, Vancouver selflessly served his King and country by fulfilling his duty. It's that self-sacrifice that to me is the mark of a great man with a great character. I wanted to create a design that focused on the man himself and captured the solitary and isolated position in which he found himself, geographically and personally."

The detail-oriented stamp features a solitary image of Vancouver standing onboard ship, gazing out toward the horizon. The stamp also features a stunning reproduction of Vancouver's authenticated signature running vertically down the right-hand side of the stamp. Permission to use the signature comes courtesy of the British Columbia Archives. The map and journal entry featured on the official first day cover (OFDC) are reproductions from Vancouver's private journals and are used courtesy of the Maritime Museum in Vancouver. Together, these historic authentic elements on the stamp and OFDC make this issue a distinctive collectible.

"This is a unique design for Canada Post as it's the first time that we've not shown the face of a person commemorated on a stamp," says Danielle Trottier, manager of Stamp Design and Production at Canada Post. "The embossing on the figure of Captain Vancouver makes it appear as if we're actually peering over his shoulder and gazing out with him to the barren horizon. This is truly a romantic and intimate stamp design."

Designed and illustrated by Niko Potton.