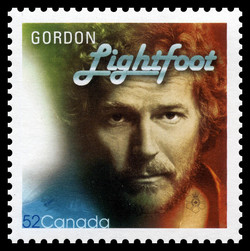 Gordon Lightfoot
"[Gordon Lightfoot's] voice is such a part of the fabric of Canada, I know it almost as well as I know my own voice." So said musician, producer and composer, David Foster, about Lightfoot's impact on Canadian culture.

Lightfoot was born on November 17, 1938, in Orillia, Ontario. A talented youth, he performed at Massey Hall at the age of 13, and performed in a barbershop quartet called The Teen-Timers during high school. Soon after, he performed with a choral and dance group on CBC's Country Hoedown and later played the North American coffeehouse circuit. His American break came with "If You Could Read My Mind," followed by such hits as "Alberta Bound," "Did She Mention My Name?" and "The Way I Feel."

Lightfoot's tributes include, among others, 15 Juno Awards, an induction into the Juno Hall of Fame, the Governor General's Performing Arts Award, and the first induction to the Canadian Songwriters Hall of Fame in 2003.