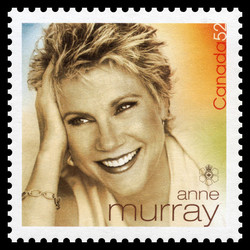 Anne Murray
Elton John once said: "I know two things about Canada: hockey and Anne Murray." With a career spanning almost four decades, it's no wonder that Murray is as well-known as Canada's beloved sport.

Murray was born on June 20, 1945, in Springhill, Nova Scotia. Her musical talent was apparent from childhood, and she began training in piano and vocals at a young age. After her 1966 graduation from university, she was offered a spot on CBC-TV's Singalong Jubilee. Her popularity increased with the release of her first hit single, "Snowbird," and when she became a regular on The Glen Campbell Goodtime Hour. A variety of hits followed, including "Danny's Song," "You Needed Me" and "Could I Have This Dance." Interestingly, her hits often made both the pop and country charts, sometimes simultaneously.

"I was deeply honoured to be chosen by Canada Post to grace a stamp this year," Murray recently said. "It's a once-in-a-lifetime acknowledgment and I'm pleased to be a part of this series."