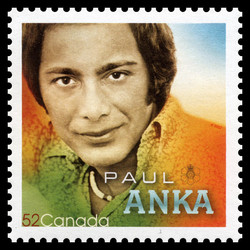 The hidden date for this stamp can be found on the singer's shoulder. Paul Anka
"A finger of Johnnie Ray, a touch of Frankie Laine, the zest of Elvis Presley, several drops of the Platters-shake and serve..." That's the way one Parisian reviewer described Canadian singing sensation Paul Anka, an Ottawa-born prodigy who had an ambition to succeed in show business from a young age.

Born on July 30, 1941, Anka was already performing local shows and on the radio at the age of 10 and had his first professional gig by age 15. His first hit, "Diana," soared to the top of Billboard's charts in less than four weeks before becoming the number one song in the world and the second-biggest-selling song ever recorded. Other hits soon followed, including "Lonely Boy" and "Put Your Head on My Shoulder."

Anka has recorded 125 albums, selling some 15 million copies worldwide. He's also the lyricist behind hits by other musicians, like Tom Jones' "She's a Lady," Buddy Holly's "It Doesn't Matter Anymore," and Frank Sinatra's signature song, "My Way." These achievements have earned him such tributes as a star on the Hollywood Walk of Fame, an induction into the Songwriters Hall of Fame, the Order of Arts and Letters from the French government, and an induction into Canada's Walk of Fame.

Upon being inducted to Canada's Walk of Fame, Anka said: "My family came here to Canada...they were allowed to pursue their dreams and soon felt that this was their home. It's true, I left as a teenager, pursued those dreams...a man once said you can't go back, you can't go home again-well, that guy was not a Canadian."