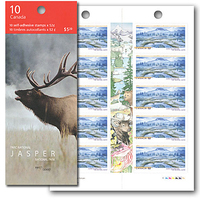 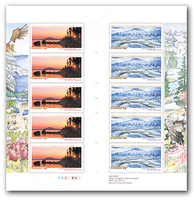 Established on September 14, 1907, the Jasper Forest Park, later known as Jasper National Park, is the largest of the Canadian Rockies parks. Jasper covers close to 11,000 square kilometres and protects the largest glacial-fed lake in the Canadian Rockies---Maligne Lake---and the highest mountain in Alberta---Mt. Columbia, which is 3,747 metres high. The park's vast wilderness of wide valleys and dramatic mountain peaks hosts three life zones---the montane, subalpine and alpine---which are home to a multitude of flora and fauna, including mountain lions, wolves, bald eagles, moose, lynx and pikas.

To celebrate Jasper National Park's 100th birthday, Canada Post will issue a single domestic rate (52¢) stamp on July 20, 2007. Designed by Saskia van Kampen, the stamp features an ethereal photograph of the park, which was taken by photographer Daryl Benson.

"By chance, I spent last summer camping at Jasper and it was a profound experience. Jasper is so incredibly beautiful, so rough and rugged and pristine," explains van Kampen. "I chose this image because of its unique perspective, and also because I felt that it communicates Jasper's dramatic otherworldliness so well."

A colour band at the top of the stamp depicts the park's horizon line and shows the various mountain shapes. This colour band is also present on the Terra Nova National Park stamp, depicting a cross-section of the park's geological formation.

Van Kampen also wanted to capture some of the variety of flora and fauna that inhabit Jasper National Park, which led to the colourful selvage design in the middle of the stamp booklet.

"I wanted to show that Jasper is more than just a landscape of amazingly beautiful mountains and valleys," says van Kampen. "And so I used a selvage design to depict a few of the most important and iconic plants and animals that live in the park such as the grizzly bear, which is so symbolic of Jasper."

The selvage, which is a single image that shows the multitude of animals, plants and insects that call Jasper National Park home, was created by Vlasta van Kampen, a Toronto art teacher and the stamp designer's mother. Vlasta also created the imagery on the official first day cover, which incorporates Jasper National Park's 100th anniversary logo.

"The selvage illustration contrasts wonderfully with the stark beauty of the image on the stamp," says Alain Leduc, manager of Stamp Design and Production at Canada Post. "The result is a stamp issue that shows the true diversity of one of Canada's national treasures---Jasper National Park."