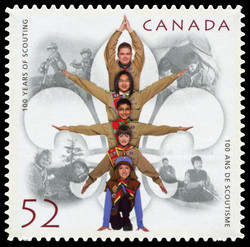 The hidden date for this stamp can be found to the left of the girl scout's head. 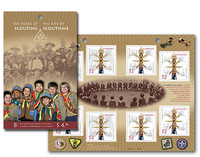 In July 2007, an estimated 40,000 people from more than 150 countries will gather in a spirit of friendship at the 21st World Scout Jamboree-one of the many events celebrating 100 years of scouting. The word "Jamboree," which originates from the Swahili greeting "Jambo" meaning "Hello," was chosen by World Scout Movement founder Robert Baden-Powell in 1920.

Baden-Powell was born on February 22, 1857, in London, England. An army officer and specialist in scouting, map-making and reconnaissance, Baden-Powell conceived the idea of training men in Scouting sometime before the turn of 20th century. "Somewhere about 1893 I started teaching Scouting to young soldiers in my regiment. When these young fellows joined the Army they had learned reading, writing, and arithmetic in school but as a rule not much else...I wanted to make them feel that they were a match for any enemy, able to find their way by the stars or map, accustomed to notice all tracks and signs and to read their meaning, and able to fend for themselves away from regimental cooks and barracks."1

It was not until a few years later that Baden-Powell decided to share his scouting ideas, theories and practices with a younger generation. In 1907, he set up an experimental camp for boys on Brownsea Island off the coast of England. This first camp of 22 boys from a cross-section of English society was the beginning of an international movement that, today, has more than 28 million members worldwide.

In Canada, more than 78,000 young people enjoy Scouts Canada programs that span towns and cities across the country.

On July 25, 2007, Canada Post will pay tribute to a century of Scouting by issuing a domestic rate (52¢) stamp designed by Matthias Reinicke of Edmonton's Lime Design Inc.

The stamp features the organization's logo, along with photos depicting some of today's typical Scouting pursuits-camping, campfire-related activities, canoeing and cycling. An archival image of the Scout "grand howl" is the central focus of the booklet. According to Reinicke: "I found the image of the howl and built the stamp around it." This mixing of old and new is an underlying theme in the stamp design, and signifies both the history and future of the organization. Reinicke continues: "I combined archival images representing the beginning of the scouting movement with modern photographs to show how the organization has maintained its core values, while moving forward and changing with the times."

"Canada Post is pleased to pay tribute to 100 years of Scouting and Robert Baden-Powell's achievements," says Liz Wong, manager of Stamp Design and Production at Canada Post. "His innovative thinking and devotion to serving young people has given the world a wonderful and dynamic international youth organization that brings together people from different races, religions, cultures and countries-all with a mission of building a better world. That's a legacy worth celebrating."

1 "Be Prepared," An Interview with Baden-Powell by the "Listener" magazine in 1937.