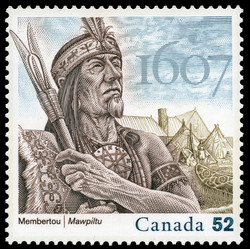 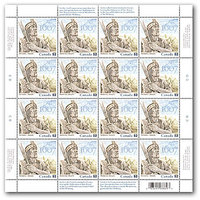 Aboriginal people have always played significant roles in Canada's history. The spread of the fur trade, for example, and European exploration and settlement would not have been possible without the help of the First Peoples, who were relied upon for their knowledge and experience. One Aboriginal who played a pivotal role in ensuring the survival of French settlement in Eastern Canada was Chief Henri Membertou, Grand Chief of the Mi'kmaq.

The French first met Chief Membertou when they landed in the harbour that would later become Port-Royal. At this time, Membertou, who recalled meeting Jacques Cartier in 1534, is thought to have been more than 100 years old. His geniality and stature created a bond between the French and Mi'kmaq that helped to develop and prolong the historically important settlement in Port-Royal. When the French left Port-Royal in 1607, Membertou took care of the fort until their return three years later.

Chief Membertou's important role in this era of Canadian history made him a natural choice to be featured on the fourth stamp of Canada Post's five-stamp French Settlement in North America series.

"No portrait was ever made of Membertou during his lifetime, although many descriptions of the Chief were written over the years," says designer Réjean Myette of the Montréal design firm Fugazi. "So, we asked illustrator Suzanne Duranceau to give life to this legendary figure."

With the help of historian Francis Back, who conducted the historical research, Duranceau was able to create a portrait with a look and personality that reflected the many different written descriptions of Membertou that still exist today. The stamp's background shows part of a typical Mi'kmaq canoe, and wigwams standing before Port-Royal to show how Membertou and his tribe lived outside the walls of the settlement during the three years the Chief took care of the fort. The stamp design was engraved by Jorge Peral.

"We increased the complexity of the technical aspects of this stamp by deciding to print the entire stamp intaglio," says Myette. "This decision pushed the printing method to its limits by printing all three colours at the same time on one engraved plate. This issue brings the engraving technique to a new level for stamps."

The stamp issue is also unusual because the official first day cover contains text in English, French and Mi'kmaq. The text was written by Stephen J. Augustine, Hereditary Chief of the Mi'kmaq Grand Council and Curator of Ethnology for Eastern Maritimes in the Ethnology Services Division of the Canadian Museum of Civilization in Gatineau, Quebec.

"The design and technical endeavours of this stamp were quite innovative, bringing the series dedicated to French settlement in North America to a new high," says Alain Leduc, manager of Stamp Design and Production at Canada Post. "This is the first time that Canada Post has printed a three-colour intaglio stamp using chablong technology. Design-wise, it was challenging to create a portrait of Membertou using only written references. We were fortunate to have been able to collaborate with people such as Stephen Augustine and Francis Back to ensure that the images and text we've used are historically accurate."

Designed by Réjean Myette. Based on an illustration by Suzanne Duranceau. Engraved by Jorge Peral. Designed by François Martin.