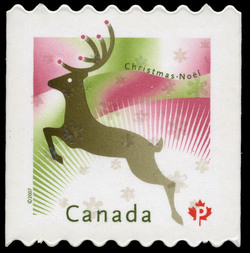 "Simplicity speaks for itself," says Alain Leduc, Manager of Stamp Design and Production at Canada Post. "At stamp size, a simple, elegant design can sometimes convey a message very effectively."

In a season of bells, baubles and abundance, Canada Post will release a secular holiday stamp that stands out with its restraint. Issued on November 1, this domestic rate (52¢) PERMANENT™ stamp depicts a single leaping reindeer, an icon of the season for children of all ages.

Everyone knows that reindeer make Christmas possible. How else would Santa get his sleigh full of gifts off the ground? The legend of flying reindeer is thought to have ancient roots in Norse folklore, but its association with Santa Claus became widely popular in North America early in the 19th century, thanks in large part to Clement Clarke Moore's "'Twas the Night Before Christmas," also known as "An Account of a Visit from Saint Nicholas." For generations, children around the world have listened for the sound of reindeer on the roof each Christmas Eve. Today, while they scan the moonlit skies for a reindeer-drawn sleigh, they can even track Santa's progress online through seasonal websites.

This new stamp captures this rich tradition in subtle strokes. A stylized reindeer in mid-leap appears to take flight, bursting out of the stamp frame. The effect is achieved through careful positioning of the silhouetted form, antlers and hind hoof just outside the frame. Over a background of shifting colour, scattered snowflakes printed in clear holographic foil give the scene a shimmer that recalls the festive spirit of the season.

Designer Hélène L'Heureux, who also created the very popular Snowman stamp for Christmas 2005, designed the reindeer stamp as a companion piece. The two share many design elements, including the snowy background landscape of rolling hills. The holographic snowflakes are another common element-in fact, they were printed from the original plate created for the Snowman stamp, but used in reverse so the snowflakes would be positioned differently.

The simplicity of the design was not an easy thing to achieve, especially with the complex shape of the reindeer. "With fewer elements, everything in the composition has to be very balanced," notes L'Heureux. "It requires a lot of attention to detail, but there's a harmony to be achieved in that perfect balance."

In her choice of background colours, L'Heureux was inspired by the retro modern look of iridescent Christmas tree ornaments from the 1960s. "I wanted to revisit that sense of kitsch," she says. "We interpreted the traditional holiday colours in a sixties modern style, pulling the green toward yellow, and the red toward pink." The result is a contemporary twist on a familiar look, just right for this simplified, stylized, very modern stamp design.