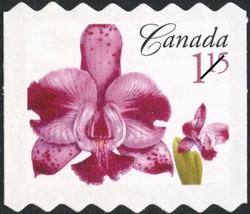 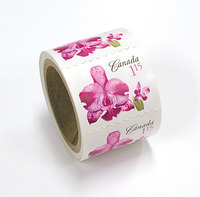 When many of us think of orchids, we think of delicate flowers that thrive only in warm, tropical countries or climatescontrolled greenhouses. These were also stamp designer Sophie Lafortune's thoughts before she began her research for a new set of stamps featuring Canadian orchid hybrids. Lafortune soon discovered that orchids live in a wide range of environments in every continent-with the exception of Antarctica.

Throughout the ages, these flowers have played varying roles in different cultures. Among other things, they've represented virility to the ancient Greeks, been used as aphrodisiacs in medieval times and appeared as exotic ingredients in Asian recipes. The Vanilla planifolia, native to Mexico and Central America, is the chief source for the popular baking ingredient, vanilla.

Of the tens of thousands of orchid species that have been identified in the world, about 80 of these can be found living in Canada in areas extending from Newfoundland and Labrador to British Columbia.

"It was interesting to learn that many orchids actually thrive in Canada," says Lafortune, who along with design partner Monique Dufour and Montréal artist Sigmond Pifko, brought four orchid species to life on this new set of definitives. Issued on December 27, 2007, this lovely quartet of stamps features a PERMANENT™ stamp, a U.S. rate (96¢), an oversized ($1.15), and an international rate ($1.60) stamp.

"These particular orchids were chosen based on variation in shape, size and colour-as well as the region in which they grow in Canada, says Lafortune. Each stamp shows two angles of the flower, a profile and a front view that help do justice to the beauty, uniqueness and complexity of the flowers. "Pifko's beautiful original illustrations enabled us to capture the intricate details of each flower better than photography could," says Lafortune.

Creating gorgeous flower and plant works of art for stamp designs is not new for Pifko, whose beautiful illustrations have adorned many Canada Post issues in the past. Most recently, these stamps have included the series of Flowers definitives issued on December 19, 2006. Pifko created these and the most recent hybrid orchid illustrations on board using a combination of acrylic, guache and watercolour.

The PERMANENT stamp features Odontioda Island Red flowers, which in the spring, exhibit showy eight-centimetre-wide blooms. The parental species of this tenth-generation hybrid are wild New World orchids. The colourful blooms of the Potinara Janet Elizabeth 'Fire Dancer', which appear on the U.S. rate stamp, are influenced in size, colour and shape by four different parents. They are characterized by predominantly yellow blooms with magenta lips that help explain the flower's fiery name.

The oversized rate stamp captures the exquisite Laeliocattleya Memoria Evelyn Light, a delightful hybrid that blooms two to three times per year and has the fragrance of spice, lilies and roses. Completing the set is the Masdevallia Kaleidoscope 'Conni', which appears on the international rate stamp. This winter-spring orchid has a wide range of textures, patterns and colours that change in different light, resulting in the kaleidoscope-like appearance for which the flower is named.

"The rest of the stamp was intentionally kept clean and simple," says Danielle Trottier, Manager of Stamp Design and Production at Canada Post. "A white, rather than coloured or natural background, makes the flowers virtually float and pop out of the frame, especially on white envelopes, ensuring that they are truly the focal point of the stamp."

Collectors will also be interested to know that all four stamps appear on a wonderful souvenir sheet.