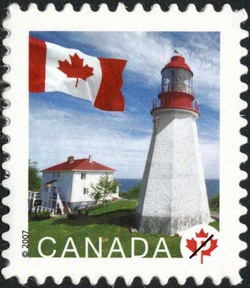 The flag is shown flying high in the left-hand corner of each stamp. "As the eye moves across the panel from left to right, you can almost hear the sound of the flag flapping in the wind," says Liz Wong, Manager of Stamp Design and Production at Canada Post. "It really brings out that deep sense of national pride."

One of the first steps in the creation of these stamps was weeks of intensive photo research by Toronto's Gottschalk+Ash International. "While the main focus was on the lighthouses, the environment surrounding them played a very important role. A great deal of careful planning went into what geographical and architectural features were present in each image," explains designer Michael Kirlew. After the photographs were selected, a number of fine details and elements were enhanced to breathe life into the resulting five stamps.

Of the five lighthouses shown, the first (starting at the top left corner of the booklet as shown below and following the column downward) depicts the lighthouse at Point Clark, Ontario. This 110-foot imperial lighthouse tower was built between 1855 and 1859 to warn of the dangers posed by the reefs approximately two miles off Lake Huron's shoreline. Next is Pachena Point, British Columbia, located along a dangerous stretch of the western coastline, south of Bamfield on Vancouver Island. The middle lighthouse, located at Warren Landing, Manitoba, was built in 1908 and is found on the west bank of the Nelson just below Lake Winnipeg. Cap-des-Rosiers, the fourth lighthouse, is located at the eastern corner of the Gaspé Peninsula, marking the entrance to Forillon National Park. The fifth stamp shows the 1758 Sambro Island lighthouse, located in Nova Scotia.

As a whole, these stamps are not only beautiful, but practical, notes Wong. "Permanent stamps are always handy, but if collectors look closely, they'll also discover some innovative new security features, including microtype."