Year of the Rat 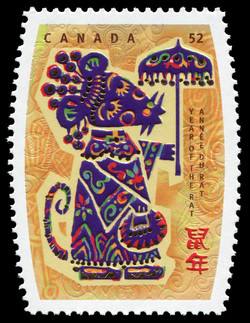 The hidden date for this stamp can be found on the umbrella's pole. 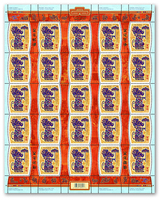 Canada Post celebrates the Lunar New Year with two stamps honouring 2008 as the Year of the Rat. The twelfth set issued in the Lunar New Year series, the Rat marks the completion of one full cycle of the Chinese lunar calendar in stamps.

As if on cue, all twelve of the lunar calendar's animals appear on the Year of the Rat souvenir sheet, bearing gifts. They are guests at the wedding of the two featured characters. The bride, depicted on the domestic rate (52¢) stamp in rich purple attire, demurely holds a parasol against a golden background, while her groom appears on the international rate ($1.60) souvenir sheet stamp, costumed in dark blue, and holding a fan in one hand and a basket of tangerines in the other. The effect is opulent. "They are like little jewels," says Alain Leduc, Manager of Stamp Design and Production at Canada Post. "The colours are bold and daring, but the red and gold are traditional in Chinese culture. In style and colour this may be the most traditional of all twelve stamp designs."

The Rat is actually the first character in the lunar calendar's twelve-year cycle, thanks to his legendary cleverness. According to the ancient tale, the Jade Emperor arranged a race across the river to determine the animals' calendar positions. Although the Rat couldn't swim, he persuaded the good-natured Ox to carry him across, and at the last minute jumped ashore ahead of him.

For the stamps, Naomi Broudo and Violet Finvers of Tandem Design Associates in Richmond, B.C., chose a different story to portray this character's resourcefulness. In "The Mouse Bride," a Chinese folk tale widely known and well loved around the world, a father mouse searches for the strongest husband for his daughter, interviewing the sun, wind, clouds and wall, but finally discovers the best candidate is a mouse from his own community. "This concept had great depth to it," says Broudo. "It allowed us to bring so many details into the design, and to incorporate other animals more prominently than had been done before."

Among the featured details are abstract representations of the failed suitors-sun, wind, clouds and wall-in the background of each stamp. Along with the intense colours, the stamps are over-printed with shimmering highlights in both pearlescent and gold foils, and all the animals are delicately embossed. Each sheet of stamps passed four times through various presses to achieve this level of detail. The result is an almost tactile sense of richness and depth, like looking at silk.

The bridal couple sparkle in their wedding finery, but lest they appear too sweet, their rodent tails curl out convincingly from under their costumes. One is reminded never to underestimate the Rat. Illustrator Harvey Chan created these clever original images entirely on the computer, in a style reminiscent of traditional woodblock printing techniques. "Harvey takes a painterly approach, and there's a whimsical quality to his work, which was perfect for this project," says Broudo.

Leduc agrees. "There's a sensitivity here you don't expect from computer work-a hand-wrought feel." It's a successful marriage, you might say, of old and new, of traditional and modern, that makes these stamps so appealing.

The Year of the Rat
A highly respected animal in Chinese culture, the Rat represents new beginnings and keen intelligence. A Year of the Rat marks a year of considerable scope and opportunity, with the launch of ambitious new idea and plans, and major breakthroughs in science and technology likely. With an emphasis on moving forward, many economies will be buoyant, and carefully considered investments will often bring good returns. However, despite any upturn, this is not a year for complacency or squandering of resources. As well as favouring family life and relationships, a Year of the Rat also brings a strong focus on leading healthier lifestyles and opportunities for personal advancement.

Rats are ingenious, charming and generous to those they love, although they do also have a tendency to be quick-tempered and critical. They make good writers, critics and publicists. Hardworking and consequently often financially well off, Rats are noted for their charm and attraction for the opposite sex. They are also likely to be perfectionists and very social, with many friends who they support in generous ways. Family is very important to Rats.