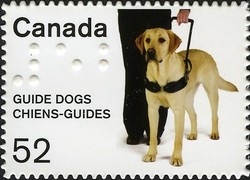 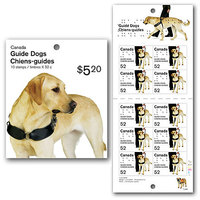 Ancient sculpture and art, old-world fables and new-world films; each in their time have documented the faithful dedication and help received from animal companions. On April 21, 2008, a commemorative stamp, released to coincide with the Montreal Association for the Blind's 100th anniversary, pays homage to the contributions of guide dogs.

The relationship between people and their guide dogs was captured in a first-century A.D. mural discovered in the ruins of an ancient Roman town. Centuries later, a wooden plaque from the Middle Ages and a mid-eighteenth century painting from France also portray a guide dog with a partner. But it wasn't until the twentieth century that the concept was introduced formally and embraced globally.

Upon the return of thousands of soldiers blinded by poisonous gas during the First World War, a sympathetic German doctor, Gerhard Stalling, explored the idea of training dogs to serve as guiding companions for those who had lost their vision. His research and training methods drew international attention and eventually launched a modern movement of similar schools worldwide.

According to Stephen Boake and Andrew Perro of Toronto's Designwerke Inc., the guiding principle behind the stamp imagery was to keep it simple. "We wanted the dog to be the dominant feature, while reinforcing the intimate connection to the human partner. So the dog is shown in three-quarter view, while the partner appears in silhouette," says creative director Stephen Boake.

The Lions Club of Canada runs a rigorous guide dog training program. Boake and Perro spent a considerable amount of time at an Oakville, Ontario, facility to select dogs-in-training with just the right personalities and temperament. A calm disposition, a high level of initiation, the ability to concentrate and a strong desire to please are characteristics expected of guide dogs; as many as 60 per cent are rejected from dog training schools by 15 to 18 months of age.

Luke, the golden retriever featured on the stamp, was in the middle of a six-month training program when the photo was taken. Boston, a black labrador in training as a chore dog for people with physical disabilities, and Lee, a border terrier, training as a hearing companion, appear with Luke on the back of the official first day cover (OFDC).

Available in a booklet of 10 stamps, the Guide Dogs domestic rate (52¢) stamp incorporates Braille into the design, "to recognize one of the groups of people that rely on guide dogs," explains Andrew Perro.

Adapting Braille or embossing techniques to self-adhesive stamps was a major consideration, concedes Liz Wong, Manager of Stamp Design and Production at Canada Post. "The raised Braille finish had to travel through two pieces of paper and the glue in between, so we had to explore these issues with the printer, along with a considerable amount of fine tuning. It's the first time this technique has been used in Canada to convey rates on a stamp, and language on an official first day cover." As well, the text for the OFDC is printed in an unusually large typeface, making it easier for those with some vision loss to read it.

For statistics on the incidence of blindness and visual disabilities in Canada, refer to the National Coalition of Vision Health website at https://opto.ca/incident-reporting-0.