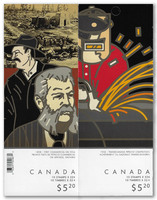 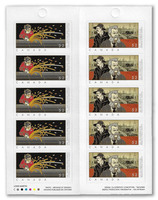 Canada owes much of its current prosperity to a thriving oil-and-gas industry, which leads our nation in several key economic measures, including capital investment, taxes and royalties. The industry also contributes enormously to our country's healthy balance of trade, as Canada is the world's third-largest producer of natural gas and ninth-largest producer of crude oil.

The industry's current pre-eminence belies its humble roots in the oily swamplands of Southwestern Ontario. Charles Tripp, an ill-fated New York entrepreneur, was convinced he could make a fortune by developing the region's massive bitumen deposits. Although the deposits would eventually produce considerable wealth, Tripp mistakenly focused solely on a single commodity-asphalt, which was in demand in the 1850s as cities around the world began to pave streets.

v Unfortunately, transporting the tarry muck to the nearest railroad spur proved expensive and Tripp had little choice but to sell some of his land holdings in the region. The land was bought by a Hamilton, Ontario, carriage-maker named James Miller Williams who, in 1858, drilled Canada's first well.

The ensuing boom transformed the region; the towns of Petrolia and Oil Springs were born. By 1861, 400 wells operated in the region producing 50 to 800 barrels a day. By the mid-1890s, the boom had run its course, although the region continues to produce small amounts of oil today.

False starts and entrepreneurial spirit were also central to the construction of the TransCanada pipeline. Canada's first major discovery of natural gas occurred in 1883, when an attempt to dig a water well struck gas near Medicine Hat, Alberta. Before long, town residents used the gas to heat and light their buildings.

Successfully developing Alberta's massive stores of natural gas, however, required delivering them to distant markets-an expensive and uncertain proposition until the government of Canada offered to guarantee loans for the construction of a national pipeline.

"For me, the challenge was how best to communicate momentous national events in the tiny frames of postage stamps," says Tim Nokes, the Banff-based artist who designed both stamps.

Each stamp resembles a poster, with bold, simple features and dynamic colours. A soft sepia underlay lends a hint of history to each stamp, while horizontal motifs suggest the timelines of each accomplishment.

"For the pipeline stamp, I created an image of a single, anonymous welder to represent the thousands of men and women who worked on the project," says Nokes. "To add a festive touch, I had the welding sparks transform themselves into bits of confetti."

Nokes adds: "For the oil stamp, I wanted to showcase a bygone era and separate the stories of Tripp and Williams. Tripp is portrayed as something of an adventurer, while Williams in is formal business attire."

Additional information can be found on the official website of the 2008 celebrations of Oil Springs at www.2008celebrate.com, the website of Lambton County at www.lambtononline.com or on the TransCanada website at www.transcanada.com.