The Founding of Quebec 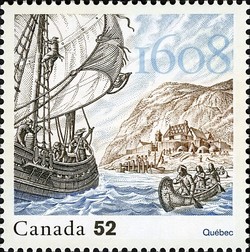 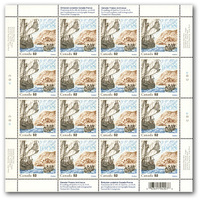 The Algonquin called it Kebec, which in their language meant "the place where the river narrows." Samuel de Champlain saw it as a place full of promise. Today, we know it as the historical walled city of Québec, and the 400th anniversary of its founding will be celebrated with a joint issue between Canada Post and France's La Poste.

When Champlain and his associates travelled up the St. Lawrence River in 1608, after five long years of struggling to survive in Acadia, they were looking for a place to call home closer to the fur trade. They came upon Kebec and, nestled under the bluffs of Cap Diamant, they built a sturdy Habitation, designed to last. The tip of the Cap Diamant promontory was a strategic point that allowed them to keep watch over the St. Lawrence and control traffic on the river. The dwelling they built served as a residence, a fort and a storage place for food and furs. Within a year, Amerindians were visiting regularly and trading furs for European goods. In 1615, the colony also became a staging ground for missionaries. But even Champlain could hardly have imagined that his settlement would be the cradle of French civilization in North America and home to the French in Canada for another four hundred years.

By the mid-1800s, the place the Algonquin people called Kebec had become the third largest maritime city in North America, was a major outlet for lumber and wheat, and was attracting attention as a "masterpiece of art and nature."

The founding of Québec was a landmark event in Canadian history. As the city celebrates its 400th anniversary this year, Canada Post honours the occasion with a remarkable new domestic rate (52¢) stamp, the fifth and last in the series dedicated to French settlement in North America that began with the 2004 St. Croix Island stamp. In recognition of the subject's historic importance, the entire series has been printed using intaglio techniques. But this last stamp is the most complex, a visual correlative to the ever-increasing struggles of Champlain and his colleagues in the New World.

"Intaglio isn't used much any more, but because the first postage stamps were printed this way, we felt it was appropriate for this subject," says Alain Leduc, Manager of Stamp Design and Production at Canada Post. "From the beginning of the series, our intention was to use intaglio in an updated, modern way, while increasing the visual complexity with each stamp. We've gained experience over the course of the series, so our goal with this last stamp was to achieve the best results possible, worthy of this important occasion."

The stamp depicts an extraordinarily detailed scene: Champlain on his ship greets natives approaching in a canoe, while construction of the new settlement proceeds in the background. It's based on a well-researched, historically accurate illustration by Francis Back, whose work was the basis for the whole series. But bringing this complex drawing to life in intaglio was the task of master engraver Jorge Peral.

Peral engraved the 2007 Chief Membertou stamp, the fourth in the series, and has previously engraved memorable wildlife portraits for Canada Post's high value definitives (see Details, Oct.-Dec. 2005). He works entirely by hand, painstakingly engraving a steel plate at stamp size. His work is by definition labour-intensive and time-consuming. Engraving this new stamp involved nine weeks of work, spread over five months. "It's the most detailed stamp I've ever done," Peral concedes. "But it was a beautiful illustration that really excited me with its possibilities."

What intrigued him was how to capture the scene's detail and sense of motion without it looking too busy once printed. When engraving, Peral bears in mind that the deeper he carves a line into the steel plate, the more ink it will hold. This allows him to engrave line drawings with depth-the foreground images are darker and more prominent, while background details are lighter and appear to recede. But with the Québec scene, Peral says: "I was particularly concerned about showing enough texture in the mountain-if I engraved it too finely, the eye wouldn't register any depth or contrast against the sky." He solved the problem by using an acid etching for that feature, a technique that produces a shakier, more textural line. "I tried to create a harmony of tones while maintaining different planes and a sense of depth in the image," he says.

Peral notes that today's state-of-the-art printing presses free him to do his best work, because they can reproduce these subtleties consistently and accurately. Leduc concurs. The subtle three-colour effects printed on the stamp are achieved in a single pass through the press, he says, by means of the "chablong" technique most often used for bank notes. "Earlier stamps in the series had backgrounds printed using lithography, but this stamp, like last year's Chief Membertou, is printed entirely using the intaglio process, except for the date '1608'. Given the stamp's complexity, this is quite an achievement."

The stamp is a joint issue with France's La Poste, which will reproduce it using the same image and techniques. It's a fitting way to celebrate this major anniversary in the two countries that Champlain united four hundred years ago.

Further information on Québec City's 400th anniversary can be found at www.monquebec2008.com or the City of Québec website at www.ville.quebec.qc.ca.