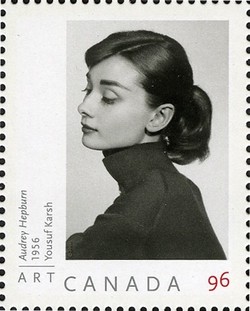 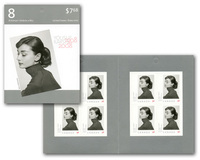 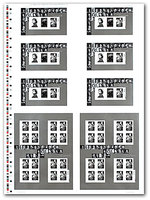 Karsh made a roaring lion stand still to be photographed, as Winston Churchill famously said of his own photo session. The Canadian photographer Yousuf Karsh captured the many colours of individual personality in complex tones of black and white. Over a sixty-year career, working from his Ottawa studio, he photographed the people who defined the 20th century in a way that explained them to the world.

"Karsh was a legend-he developed a style of portrait photography distinctly his own," says Alain Leduc, Manager of Stamp Design and Production at Canada Post. Dramatic lighting and inventive composition were key elements of this style, but these elements presented challenges when it came to reproducing his work at stamp size.

This year, to mark the 100th anniversary of his birth, Canada Post is issuing a set of three stamps honouring Karsh and his work. "Yousuf would regard this as the ultimate honour-that the country that took him in and nurtured him is now featuring the work of his life," says his widow, Estrellita Karsh. "It's one more tribute in his unending love and affection for Canada."

Karsh passed away in 2002 at the age of 93, after a life dedicated to his art. Born in Armenia-in-Turkey in 1908, he arrived in Canada in 1925 to begin an apprenticeship, first with his uncle in Sherbrooke, Quebec, then with an acclaimed portrait photographer in Boston. By 1932, he had opened a studio of his own in Ottawa, determined to photograph those he considered people of consequence.

An international rate ($1.60) stamp features the photograph that made Karsh famous. In 1941, when British prime minister Winston Churchill visited Ottawa to address the House of Commons, Karsh was asked to photograph him. Taken by surprise, Churchill was not inclined to co-operate-he refused to pose without his customary lit cigar. Karsh politely removed it, and captured the resulting expression on film. The photo appeared on the cover of Life magazine as an embodiment of British wartime resolve. Karsh of Ottawa had become an international name.

The Churchill photograph was an obvious choice for the stamp because it's so well known. For the U.S. rate (96¢) stamp, designer Hélène L'Heureux chose an entirely different mood in Karsh's tranquil portrait of the film actress Audrey Hepburn. "Her peaceful and serene expression makes an excellent contrast to Mr. Churchill," she says. Finally, to ensure we don't lose sight of the artist behind the camera lens, a self-portrait of Karsh at work was chosen for the domestic rate (52¢) stamp.

These three stamps are part of the Art Canada series, and their simple, asymmetrical frames, white to evoke a framing mat, are integral to the series' design. The Karsh portraits have been reproduced from photographs in the collection of Library and Archives Canada. As with all artwork featured in the series, they have been reduced in size but not cropped. "These portraits appear as taken," says Leduc. "Throughout the series, we've tried to show the work as created, so the stamp sizes are always different." For designer L'Heureux, this meant selecting three portraits that would work well as a set, while representing aspects of the artist's style.

"There is a deceptively simple look to Karsh's portraits, which we hoped to capture," says Leduc. "These three stamps represent well the elements of composition he often used-an extreme close-up, in profile, for Audrey Hepburn; an artist in action, positioned in the middle ground, in his self-portrait; and in the Churchill portrait, a fairly direct, front view, shot from further back."

Reproducing these dramatic, black-and-white compositions at stamp size, however, was no easy matter. "If we'd printed them with just one shade of black, we'd have lost a lot of detail," says Leduc. "We had to use several shades of black to achieve a sense of depth and contrast. For example, in order to add strength to the dark blacks, we used a dense black on top of grey. We printed the lighter details in a lighter shade of black. It was very interesting technically-this is a simple look, but it's not simple to execute."

The three stamps offer a glimpse of the many diverse personalities Karsh photographed over his long career. A larger sampling of his portraits appears in miniature on the souvenir sheet and in the centre strip of the stamp pane. Aligned like photos on a negative strip, this panorama of famous faces includes Albert Einstein, Mother Teresa, Ernest Hemingway, Sophia Loren and Walt Disney, among many others. Even The Queen sat for Karsh as a young woman. Like the stamp images, L'Heureux says, she chose these images with care from among the thousands of Karsh photographs in the Library and Archives Canada collection. "When you look at these photographs, you see that each one represents part of the history of the 20th century."

In addition to the souvenir sheet with all three stamps, Canada Post is issuing two other booklets, one featuring the U.S. rate (96¢) stamp and the international rate ($1.60) stamp. "We expect these stamps will be very popular, and not just among collectors," says Leduc. "Imagine how interesting it will be for letter writers to mail Ms. Hepburn to the U.S., or Churchill to the world." What an appropriate tribute to Karsh of Ottawa, who built a career exploring extraordinary people and the humanity that binds us.

Additional information about the artist is available at www.collectionscanada.gc.ca/yousuf-karsh/index-e.html.

Designed by Hélène L'Heureux. Based on a photograph by Yousuf Karsh.