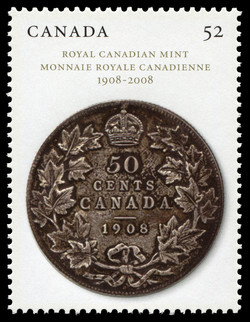 The hidden date for this stamp can be found along the edge of the coin to the left of the crown. 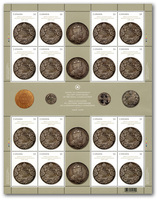 On June 4, 2008, Canada Post will issue a commemorative domestic rate (52¢) stamp to mark the centennial of the Royal Canadian Mint (RCM).

The story of currencies used in Canada is a rich part of the country's heritage. From wampum and playing cards to tokens and Sols, currencies used to facilitate trade evolved continually. With Confederation came the Canadian dollar-but this country's currency was produced elsewhere until 1908.

For many years, Canada's coins were minted in Great Britain. By the turn of the century, however, the chorus of calls to establish a mint in Canada grew steadily louder. The government of Canada chose to locate the new facility near Parliament Hill and construction began in 1905. In January 1908, Governor General Earl Grey activated the RCM's press to strike Canada's first domestically produced coin.

Originally established as a branch of the Royal Mint, the RCM did not pass completely into Canadian hands until 1931. By that time, the RCM regularly minted coins for other Commonwealth countries, including Jamaica. During the next decade, the RCM produced the first Canadian military decoration, the Canada Medal.

As Canada's population increased, so too did the demand for coins. By the 1960s, the RCM's facilities in the National Capital Region could no longer keep pace with demand, and plans for a second facility began to take shape. Given its proximity to major markets and nickel mines, Winnipeg was the obvious choice. The new facility began to strike coins in 1975 and now produces all of Canada's circulation coins in addition to currency for dozens of other countries.

The RCM's commitment to quality and innovation has earned it an international reputation and a growing list of clients. In the past 25 years, the RCM has struck more than 52 billion coins for dozens of countries. A Crown corporation since 1969, the RCM also turns a handsome profit: in 2006, it earned a net income of $11.2 million.

The RCM is a crucible of innovation. The institution created the world's first coloured circulation coin-the 2004 Remembrance Day quarter featuring a red poppy. In 2007, the RCM became the first to strike a coin made of 99.999 per cent pure gold. Among the RCM's many technical innovations is a patented multi-ply plating process that creates electromagnetic signatures that can be read by vending machines.

The commemorative stamp showcases one of the first coins minted at the RCM: a 50-cent piece featuring a crown and a border of maple leaves. The back of the coin-a portrait of Prince Albert Edward, Queen Victoria's son-appears on the pane, along with images of other coins from the series.

"I wanted to create a design that captured the essence of what the RCM produces," says designer Stéphane Huot. "A coin is not only a national symbol, but also a part of everyday life. So rather than feature a mint-edition copy, I chose a coin that Canadians had actually held in their hands."

To create the design, Huot worked with an original coin supplied by the RCM. To further accentuate the coin, the stamp features a high-relief image achieved through special embossing techniques.

For additional information about the Royal Canadian Mint, visit www.mint.ca.