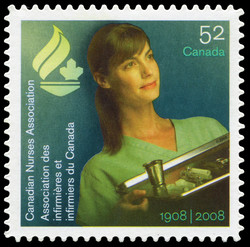 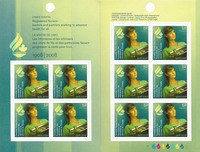 The first trained nurses in this nation were a trio of Augustinian nuns dispatched by France in 1639 to provide assistance to Jesuit missionaries struggling in the wilds of the New World. Revered for their compassionate care, these nursing sisters served as both administrators and doctors. They performed surgery and concocted medicines. Myriad miracles were attributed to their efforts. Today, their legacy is carried forward by more than a quarter million registered nurses in Canada. A domestic rate (52¢) stamp, marking the centenary of the Canadian Nurses Association, celebrates the enduring contribution of Canadian registered nurses to the past, present and future. The stamps are available in booklets of 10.

"The commemorative Canadian Nurses Association stamp features the Association's logo along with the image of a nurse," says Liz Wong, Manager of Stamp Design and Production at Canada Post.

Doreen Colonello, senior designer at Toronto's Gottschalk+Ash International says the goal was to depict a modern nurse, her capabilities and significant role in the Canadian health-care system. "The image we chose was a working nurse in her greens, carrying a tray of nursing tools, clearly serving as a compassionate, dedicated and knowledgeable caregiver."

Wanting to capture the ambience of a hospital room at night, Colonello admits it was a challenge to achieve a unique light setting. "We used gels to accomplish this. We wanted the lighting to be warm and special, but still realistic."

The accompanying official first day cover portrays a clinical nurse "tending to a patient, bedside, in a manner that conveys one of the five professional roles that registered nurses practice today," adds Colonello.

The early roots of the profession were a driving force in building today's internationally renowned Canadian health-care system. The profession flourished, which necessitated the call for a congruent organization that would ensure nurses of Canada had a national voice, and by 1899, nurses began to organize themselves into formal groups across the country. In 1908, representatives from all organized nursing bodies in Canada were invited to meet in Ottawa to discuss uniting as a national association, and The Canadian National Association of Trained Nurses was formed. The following year, in July 1909, the Canadian group was accepted as a full member at the International Council of Nurses meeting in London, England. In 1924, the association changed its name to the Canadian Nurses Association (CNA). Today, the CNA is an influential federation of provincial and territorial associations.

In its early days, the association's main goal was to secure legislation for nursing professionals-a daunting task in an age of gender inequality. Although the profession is still largely comprised of women, males represent more than five per cent of registered nurses. In 2005, the ratio of practising registered nurses to the Canadian population was one to every 120 persons, a force that's had a monumental impact on health-care delivery.

Holding true to the actions of Canada's nursing pioneers, and on the occasion of the Canadian Nurses Association's 100th anniversary, nursing remains a profession focused on the personal touch-helping people attain, maintain and recover optimal health-from birth to end of life.

Additional information about the association is available at www.cna-aiic.ca.