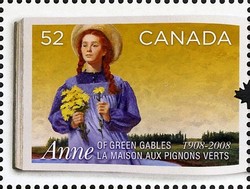 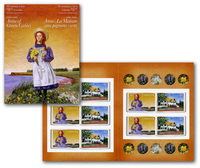 It's hard to believe that the irrepressible Anne Shirley might have lain hidden in a hat box forever. When Lucy Maud Montgomery completed her first novel in 1905, she received several rejections from publishers, so she put the story away. But Anne, with characteristic persistence, must have tugged at her imagination. A few years later, Montgomery retrieved the novel and sent it out again. Anne of Green Gables was finally published in Boston in 1908, to immediate success.

One hundred years later, Anne and her story are featured on a pair of domestic rate (52¢) stamps issued by Canada Post to celebrate the novel's centennial. The stamp images are based on original artwork officially authorized by The heirs of Lucy Maud Montgomery and the Anne of Green Gables Licensing Authority Inc. The painting of Anne was created by Ben Stahl, and that of her beloved Green Gables house by Christopher Kovacs.

"Anne is such a unique character, so full of life and so inspired by nature," says designer Dennis Page. "These paintings represent her story well-the images are surrounded by nature, and Anne appears lost in her thoughts."

Anne's name, he notes, is printed on the stamps in a typeface as personal and expressive as she is. Page also worked with digital illustrator Mike Little on a unique frame for the two images, which serves as a subtle reminder that Anne's famous story is actually a work of fiction. "The stamp frames are meant to resemble the pages of a book printed in 1908, with deckle edges and an original look and feel."

Even Montgomery said she never felt quite truthful admitting that this vibrant red-headed girl was indeed a fictional character. Although Anne of Green Gables was her first novel, Montgomery had been writing poems and stories since childhood, inspired by her life on Prince Edward Island. Born in 1874, she was not even two when her mother died of tuberculosis and she was sent to live with her grandparents in Cavendish, a town later made famous as Avonlea. She grew up immersed in nature and Anne's scenic descriptions of Avonlea are drawn from Montgomery's own experiences of living in Cavendish where she was enchanted by the orchards, woods and beaches. Montgomery once wrote, "Everything was invested with a kind of fairy grace and charm, emanating from my own fancy, the trees that whispered nightly around the old house where I slept, the woodsy nooks I explored, the homestead fields, each individualized by some oddity or fence or shape, the sea whose murmur was never out of my ears - all were radiant with 'the glory and the dream'...amid all the commonplaces of life, I was very near to a kingdom of ideal beauty."1 Montgomery continued writing while training and working briefly as a teacher, and was earning a comfortable income from her published work even before the success of Anne of Green Gables. Eventually she married and moved to Ontario, but her heart and imagination stayed on the Island.

The house known as Green Gables is now a national historic site, with an operational period-style post office. Montgomery never actually lived there, but it was home to relatives, and she often explored the surrounding property. The setting clearly inspired her-the landscape near Cavendish is as vivid a character in her books as any other. To recognize this special place as uniquely Canadian, the souvenir sheet bears a maple leaf die perforation between the two stamps.

Anne has captured the imaginations of girls around the world and her story has a special history for many Japanese. Anne first arrived in Japan in the 1930s with Canadian missionary Loretta Shaw. When Shaw left the country at the start of the Second World War, she gave a copy of the novel to her friend Hanako Muraoka, who translated it as Akage no An, literally "Anne of the Red Hair". After the war ended, Japanese education officials were eager to introduce children to Western texts, and Muraoka suggested the novel. In 1952, it was included in the school curriculum, and it has been well loved by generations of students ever since. Today, thousands of Japanese travel to Cavendish each year to visit Anne's fictional home.

Despite its distinctly Canadian setting, Anne of Green Gables belongs to the world. The story has captured the imaginations of readers in many languages and countries. "In Japan, readers have formed a fan club called the 'Buttercups,' named for Anne's favourite flower," says Joy Parks, Research Officer, Stamp Services, at Canada Post. Buttercups appear on the floral envelope seals included with the stamp booklet, part of a collection of flowers reproduced from the paintings depicted on the stamps. Like the wildflowers that return to bloom each spring, Anne lives on in the imagination of her readers, as real today as when she was first published.

Additional information is available on the following websites:
www.gov.pe.ca/lmm
www.lmmontgomery.ca

Image of Anne of Green Gables created by Ben Stahl.