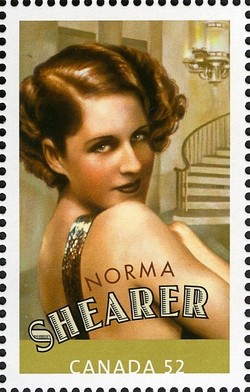 Norma Shearer: The first lady of the talkies
Born in Montréal's upper-middle class Westmount area, Norma Shearer's lifestyle took a turn for the worse during the Great Depression. Norma and her sister were taken to New York City by their mother who hoped the girls could earn money acting.

Times were hard, and Norma took whatever small parts came her way, but her luck changed when she landed a role in the 1920 movie The Stealers. The film brought her to the attention of MGM's general manager, Irving Thalberg, who tracked her down and gave her a role in The Wanters (1923).

Shearer and Thalberg were married in 1928, after which Norma worked tirelessly to improve her acting skills. She was named "First lady of the talkies" by the press for her role in MGM's 1929 movie Trial of Mary Dugan. Stunningly beautiful, Shearer avoided typecasting by selecting many different roles, including playing Elizabeth Barrett Browning in the 1934 version of The Barretts of Wimpole Street. The film earned Shearer an Academy Award nomination for best actress. Although Shearer died in 1983, she continues to be remembered as a classically poised and elegant star of the silver screen.