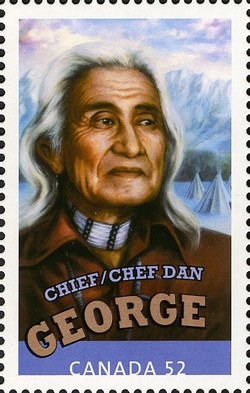 Chief Dan George: Finding fame at 60
Chief Dan George, born in July 1899 in North Vancouver, is perhaps the only Hollywood icon to have been discovered as a 60-year-old bus driver. As a younger man, he took whatever work he could find to support his wife and six children. His break into acting came in the early 1960s when the actor who played Ol' Antoine in the CBC series Cariboo Country fell ill and a replacement was needed. The story goes that George's oldest son, Bob, who had a small part in the show, suggested they use a real aboriginal in the role and introduced his father. George immediately brought the character to life, and became a driving force behind the series' success. When Disney studios adapted the series into the movie Smith!, George once again took the role of Ol' Antoine and was thrust into the Hollywood spotlight.

George subsequently played Old Lodge Skins in Little Big Man, a milestone American film. His performance won him an Academy Award nomination, a Golden Globe nomination, the New York Film Critics Award and the National Society of Film Critics Award. George acted in numerous other films, including The Outlaw Josey Wales, Harry and Tonto, and Americathon. He was appointed an Officer of the Order of Canada in 1971.