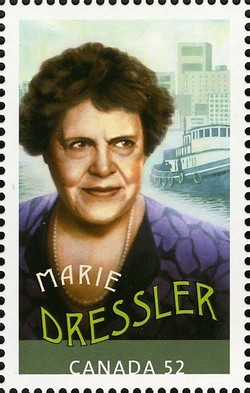 Marie Dressler: The first female star of film comedy
Marie Dressler was born Leila Marie Koerber (some sources say von Koerber) in Cobourg, Ontario, on November 9, although the year of her birth is less certain. But, whatever year she was born, Dressler was destined to become the first female star of film comedy. Her show business career began with the Nevada Stock Company, which she followed by work with opera companies, stage work in the eastern United States and appearances on Broadway. She reached the pinnacle of her stage career with a performance for King Edward VII in London, after which she made her move into film comedy, starring in Tillie's Punctured Romance, the first feature-length comedy ever made.

During her career, Dressler appeared in more than 40 films, including Min and Bill (1930) for which she won an Oscar for Best Actress, Anna Christie (1930), Dinner at Eight (1933) and Tugboat Annie (1933). She earned a star on the Hollywood Walk of Fame, and was the first woman to be featured on the cover of TIME magazine (August 7, 1933).