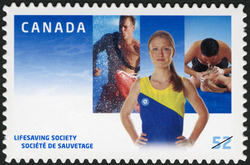 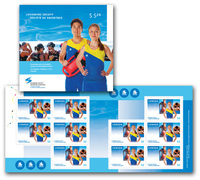 Watery blues wash gently across the background of a new domestic rate (52¢) stamp issued to mark the centennial of Canada's Lifesaving Society. Against these tranquil tones, scenes of lifeguards exploding into action are a sudden contrast. There's no mistaking the message-even placid waters can be deadly for the unprepared.

Drowning is one of the most common causes of accidental death in Canada, but these deaths are often preventable. One-third of the more than 400 Canadians who drown each year are non--swimmers, and 99 per cent die when no lifeguard is present. "The Lifesaving Society has one singular focus, to reduce drownings and aquatic injuries," says National President Jeanie Hutton. "We provide lifesaving, lifeguarding and leadership education, and public education to promote safety in, on and around the water. We're very excited about this stamp, because it recognizes the importance of our work."

The confident young woman in the foreground of the stamp represents the more than 500,000 Canadians trained in Lifesaving Society programs each year. The action photographs behind her illustrate two kinds of water rescues-one lifeguard plunges into open water, rescue buoy in hand, and another performs CPR on an accident victim. Young people like these not only save lives, but also spread the word about how to prevent accidents. Through its volunteers, more than 23 million Canadians heard the Lifesaving Society's Water Smart™ messages and National Drowning Prevention Week promotions in 2006.

Increasing public awareness about water safety was one of the Society's founding goals. It traces its roots to London, England, where, in 1891, the Royal Life Saving Society was formed. In 1894, a member named Arthur Lewis Cochrane brought his lifesaving skills to Canada, where he began teaching them to students at Toronto's Upper Canada College. The organization he developed held its inaugural meeting as the Royal Life Saving Society Canada in 1908. Since then, it has maintained the Canadian standard for lifeguarding and introduced innovative lifesaving techniques, including mouth-to-mouth rescue breathing in the 1950s and its first CPR training program in the 1960s.

The stamp celebrating the Society's centennial is inviting, consistent with its goal to encourage water safety and swimming skills among all Canadians. As the stamp images wash into a crisp white frame, an airy, outdoor sense of space is created. The photographs feature the welcoming faces of individuals who reflect the gender and ethnic diversity of lifeguards across the country, and these dynamic images reinforce the fact that water safety depends on individual action.

"It just made sense to create an energetic, athletic, outdoorsy image for this stamp," says designer Derwyn Goodall. "I wanted a fresh and lively look to convey some of the energy and responsiveness involved in lifeguarding as well as the confidence you need to really take care of people."

Taking care of each other is what the stamp celebrates. It's being issued during this year's National Drowning Prevention Week, at the height of summer swimming season, when a little prevention could save many lives.

For more information about the Lifesaving Society, please visit www.lifesaving.ca.
Water Smart™ is a trademark of The Royal Life Saving Society Canada.