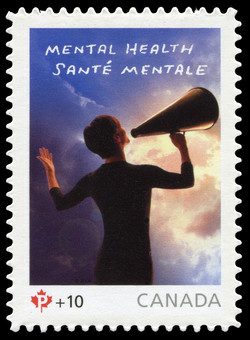 Mental illness is rarely discussed, often misunderstood, and so commonly kept hidden that it's been called the "Invisible Disease." Its scope, scale and severity, however, are both far-reaching and deeply felt. In fact, one in five Canadians will suffer from a mental illness at some point in their lives, while many more will be touched by the illness of a loved one or friend. To help Canadian communities confront this problem openly, and with compassion and understanding, Canada Post has adopted Mental Health as its cause of choice and has established the Canada Post Foundation for Mental Health. The Foundation aims to raise funds to reduce the stigma associated with mental illness so that those affected feel more able to discuss their challenges and seek solutions.

As part of the corporation's pledge to raise awareness about this pervasive problem, one PERMANENT™ domestic rate (52¢) semi-postal stamp will be issued. A semi-postal stamp is one in which the cost of the stamp includes a surcharge in addition to the face value, in this case 10 cents, which will be used by the Foundation to fund mental health research and patient support. The only other Canadian semi-postal stamps were issued between 1974 and 1976 to support the Olympic Games in Montreal, and in 1996 to support literacy in Canada.

The concept for the commemorative stamp issued for mental health is based on a report co-authored by Michael Kirby, Chair of the Mental Health Commission of Canada. This report, entitled, "Out of the Shadows at Last: Transforming Mental Health, Mental Illness and Addiction Services in Canada," is the blueprint for transforming mental health services in Canada and focuses on the lack of knowledge, compassion and services that prevent mental health patients from receiving the care they need. "Their plight is not being heard; nobody's listening," explains designer Paul Haslip of HM&E Design Communications. "We saw this stamp as an opportunity to advocate change."

The digitally-enhanced photograph on the stamp features a figure stepping out of the shadows, using a mega-phone to broadcast the plight of mental health patients. Alain Leduc, Manager of Stamp Design and Production at Canada Post, explains, "This figure represents all those affected, both directly and indirectly, by mental illness. By bringing this pervasive issue out of the shadows and into the open where it can best be served, it really speaks to the objectives of the Canada Post Foundation for Mental Health."

"Mental illness is an issue that is relevant to everyone in every community across our country," says Moya Greene, President and CEO of Canada Post. "Issuing this stamp is a key part of our effort to heighten awareness of the scale of the problem as a fundamental step toward providing those affected with the resources they need to get better."

The stamp cancellation site will be Ottawa, as the city is home to the Foundation's headquarters.

To learn more about the Canada Post Foundation for Mental Health or to make a donation, visit http://www.canadapost.ca/web/en/pages/aboutus/community.page.