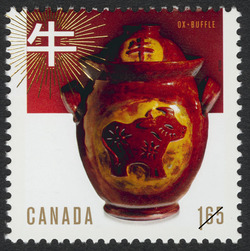 Fireworks, lion dances, gold, and a splash of red for good luck! To the Chinese, no New Year display is too extravagant. After all, the parades and festivals that take place during China’s longest and most important celebration represent the shared hopes that good luck and prosperity will accompany the new cycle of the moon.

It’s also a special time for Canada Post, when ultra-creative stamp designs—topped off with gold foil and innovative printing techniques—are issued to celebrate what is widely credited as the oldest surviving calendar system in the world. This year, we honour the Year of the Ox: a time of stability, harmony and balance. The issue will be the first release in a new 12-year Lunar New Year series.

The international stamp was inspired by long traditions of Chinese art and Lunar New Year decor. “We featured a work of pottery, as the art form is heavily rooted in Chinese history,” explains Ivan Novotny, Vice President of Design at Toronto’s Taylor|Sprules Corporation. An ancient art form of Asian descent, pottery wares have been sculpted in China since the Paleolithic era. “We also chose it for its connection to the earth, since 2009 is the year of the Earth Ox,” adds Novotny. According to Chinese philosophy, everyone and everything is subject to the influence of the five elements: water, metal, earth, wood, and fire. The elements rotate every year, and each is associated with specific character traits: stability, industry and practicality in the case of earth element.

The spark that surrounds the Chinese character for “Ox” in the top-left corner of the international stamp evokes fireworks. Gold foil is applied to the spark, while clear foil and multi-level embossing techniques add shine and dimension to the pottery vase. Novotny notes, “There’s an interesting juxta-position between the traditional quality of the pottery and the modern flair of the design.”

The domestic stamp features an illustration of an Ox before a mountainous landscape. “The landscape and tan earth tones in the background speak again to this year’s element, earth,” explains Novotny. Plum blossoms—popular subjects in Chinese art and a common feature in Lunar New Year decor—are peppered throughout the background of the stamp and pane of 25. These flowers are indigenous to China and the country’s national flower. Blooming in the early spring snow, they symbolize life, rebirth and adversity overcome. The Ox and the blossoms, adorned with clear foil, shine in the light, while multi-level embossing techniques add depth and dimension. Alain Leduc, Manager of Stamp Design and Production at Canada Post, adds, “With the image so full of fine details, the embossing in the design is extremely intricate.”

Even the long, scroll-like shape of the new souvenir sheet—a format that will remain standard throughout the series—is rooted in Chinese tradition, as decorative scrolls are widely believed to have their origin in China. “It was a challenge to marry these two stamps so different stylistically on the souvenir sheet,” notes Novotny. “But they were harmonized through a heavy use of the lucky colour red.” The Chinese characters that run vertically down the souvenir sheet list all 12 animals of the zodiac, fading from one year to the next as they appear in the lunar cycle— a feature that reinforces the scroll concept.

With its insightful blend of time-honoured customs and modern flair, this issue is a fitting tribute to an ancient tradition that is well-known and celebrated around the world today—not to mention an excellent kick-off to a new 12-year stamp cycle.