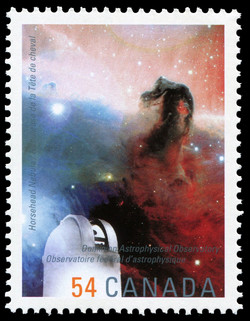 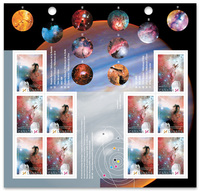 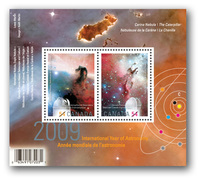 Souvenir sheet of 2 stamps with overprint 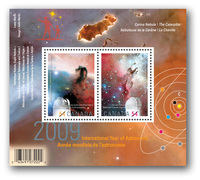 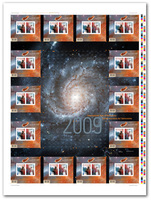 “Many people tend to postpone their enjoyment of the stars because they are constantly with us, but the iridescence of the twilight bow or the orange harvest moon rising slowly over a smoky fall landscape are celestial real-life scenes to look forward to from night to night or year to year.”
– The Stars Belong to Everyone, Helen Sawyer Hogg, Canadian astronomer

Since the dawn of time, we’ve looked to the sky for hints of our cosmic roots—our place in time and space. The celestial jewels above have been an oracle for religions, a muse for poets and a compass for explorers. They continue to form the basis of our calendars, our clocks and our seasons. Our modern world is clearly indebted to the contributions of the world’s astronomers.

The cosmos have always been a subject of special fascination in Canada. Long before the nation came to be, Aboriginal peoples looked to the constellations to track changing seasons, plan important rituals, and shape their understandings of the universe. Later, European explorers relied on the sky to guide them to the New World, using it to keep time, survey land and navigate.

Today, Canada’s astronomers are world research leaders. Some of the many Canadian contributions to the field include the first accurate estimate of the mass, size and rotation of our Milky Way galaxy and the co-discovery of the first black hole in outer space. Just last year, Canadian-led teams captured what is likely the first picture of a planet around a normal star similar to the sun and used an innovative imaging technique to discover a triple planet system. IYA 2009 is an excellent opportunity to trace our cosmic roots through the mysterious wonders of the sky. This April, two commemorative stamps will be issued to mark the occasion.

Each stamp pairs an important Canadian observatory with a nebula. One stamp features the National Research Council’s Dominion Astrophysical Observatory (DAO) in Saanich, BC. Completed in 1918, the DAO was the first Canadian observatory of international calibre and, for a brief period, it was the largest operating telescope in the world. It is pictured before the Horsehead Nebula, an evocative cloud of cold gas and dust silhouetted against bright, swirling gases in the constellation of Orion.

The other stamp features the Canada-France-Hawaii Telescope (CFHT). This world-class 3.6 metre telescope is located atop the summit of Mauna Kea, a dormant volcano rising 4,200 metres above the Pacific Ocean. Opened in 1979, the highly-successful CFHT is Canada’s first partnership in an international observatory, in this case between the University of Hawaii, France’s Centre national de la recherche scientifique, and the National Research Council of Canada. The observatory is featured before the Eagle Nebula, a massive tower of cold gas and dust shaped like a mythical beast in the constellation of Serpens. Both nebulae were photographed by Jean-Charles Cuillandre with the CFHT.

“The observatories featured in this stamp issue represent two critical steps in the development of present-day astronomical excellence in Canada,” says the NRC’s Jim Hesser, Chair of the IYA 2009 partnership of Canadian amateur and professional astronomers. “Federally funded facilities provide Canadian scientists access to instruments on some of the very best observing sites on Earth, as well as in space. Their discoveries inspire the next generation of scientists, engineers and educators, while reminding us that all human activity occurs under one beautiful sky.”

And to designer Keith Martin, these observatories are interesting not only as tools for scientific advancement. “They represent the human quest for cosmic knowledge,” he explains. The air of mystery and wonder captured on the stamps is carried onto the first day cover, souvenir sheet, booklet and enhanced press sheet, where mesmerizing images of far-away galaxies and nebulae hint at the many marvels of our vast universe.

The stamps will be cancelled in Saanich, BC, home to the Dominion Astrophysical Observatory (DAO).

To learn more about Canada’s participation in the International Year of Astronomy 2009, visit: www.astronomy2009.ca.