Preserve the Polar Regions and Glaciers 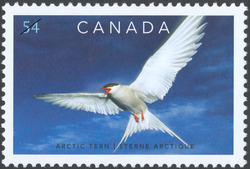 “We are playing Russian roulette with features of the planet’s atmosphere that will profoundly impact generations to come. How long are we willing to gamble?”
David Suzuki

Much more than just marvellous mounds of snow and ice, glaciers are the world’s largest freshwater reservoir. So large, in fact, that together they cover an expanse the size of South America. The rapid loss of these ice cores due to climate change threatens essential supplies of water necessary to maintain all forms of life on this planet.

By the end of this century, global temperatures are expected to rise between 1.4 and 5.8°C. Scientists predict that a 4°C temperature increase would melt nearly half the world’s glaciers. As they melt, we will see an increase in floods, water shortages, and a rise in sea levels that will destroy many, if not all, coastal communities and habitats. Climate change has already wiped out an entire ecosystem on the crumbling ice shelves of the Arctic.

As part of Canada Post’s commitment to the global community, and in partnership with approximately 30 countries from around the world, two stamps will be issued this spring under the theme, “Preserve the Polar Regions and Glaciers,” to raise awareness of the dangers of climate change as well as the many creatures impacted by its effects. Jim Phillips, Director of Stamp Services at Canada Post, is delighted to be participating in this international stamp campaign. “It provides a great opportunity for Canada Post to connect, interact with and learn from other members of the greater network of postal administrations to which we belong.” Each participating issue features the crystal insignia, the symbol for the campaign, created by Finnish graphic designer Saku Heinänen.

The stamps, featured on a souvenir sheet, were designed by Tiit Telmet of Toronto’s Telmet Design Associates. “Polar regions and glaciers respond very quickly to climate change,” says Telmet. “Their loss directly impacts human populations and ecosystems.” Creatures that inhabit the Arctic and Antarctic polar regions, the first to feel the dangerous effects of climate change, are featured on the stamps and souvenir sheet. “By focusing on these animals, our goal was to highlight the dangers they will face if action is not taken to preserve their habitats.”

In the top half of the souvenir sheet, an Arctic Fox explores a snowy Arctic landscape, alongside a stamp featuring a polar bear. In the lower half, a group of penguins congregate in an Antarctic setting, surrounding a stamp that features an Arctic Tern. “This bird serves as a link between the Arctic and Antarctic regions, since it migrates yearly between the North and South Poles,” adds Telmet. Though the Poles may seem far from home, these animals remind us that our actions have consequences, that all is connected, and that the loss of their habitats foreshadows the loss of our own.

The stamps will be cancelled in Eureka, Nunavut, home to Canada’s most northerly post office.

To learn more about the dangers of climate change in Canada, visit Environment Canada’s website.