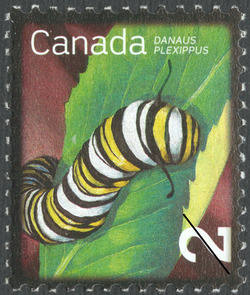 Don’t let the monarch caterpillar’s small size fool you. This little larva has a big job to do! Day and night, it feeds away through five stages of growth (or instars). And since its food of choice is the milkweed, which can be a pest when it crowds out other plants, the monarch is a great help to gardeners.

In 2007, as part of our tribute to the beneficial insects that roam Canada’s gardens and marshes, homage was paid to the golden-eyed lacewing, the cecropia moth, the convergent lady beetle, the northern bumblebee and the Canada darner. This spring, the monarch caterpillar (Danaus plexippus) joins the ranks of these helpful critters, squirming onto a 2-cent low value definitive stamp of its own.

To designer Keith Martin, the chance to add a new addition to this playful series was a great thrill from a designer’s standpoint. “It was gravy, the cherry on top,” he says. Adding modestly, “I should point out that the strength and success of this series is due largely to the subject matter itself.” Making use of the rich, saturated colours that unified the first set, Martin sought to bring out the caterpillar’s unique characteristics. “I explored many scene and positioning options to figure out how to best showcase the monarch’s stunning colour banding,” he explains. “Posing the caterpillar in an ‘S’ shape moving towards the viewer captures its flexible nature, the slinky qualities of its physical form, and its bright stripes.”

The creative thrill also extends beyond the stamp. “During the development of this stamp, I could not wait to get to the first day cover,” Martin tells us. “I released the hounds, creating a playful infestation of monarchs running amuck across the envelope, and allowing the critters to crawl right onto the stamps themselves. I loved positioning the caterpillar in different positions, building up the crowded cover image, playing with the patterns within patterns, and in the end achieving a random and organic result,” he explains. “Speaking as a designer as well as an artist, the project was fantastic fun!”

By featuring the butterfly on the front of the first day cover and the chrysalis on the back, Martin highlights the monarch’s spectacular life cycle. As one of few migrating butterflies, the monarch travels yearly from Canada to Mexico – a process that can take up to three generations to complete. The Ontario town of Leamington, where the stamp has been cancelled, is on the migration path for monarchs en route to their winter quarters in Central Mexico.