The Canadian Horse and the Newfoundland Pony 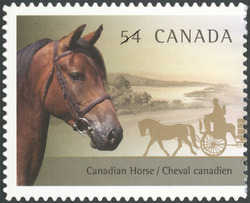 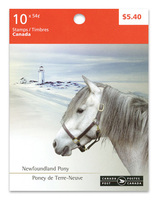 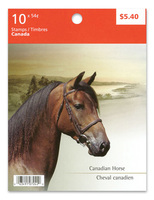 Though Canada’s rugged landscape was not always kind to the country’s earliest settlers, help in conquering the land came thanks to the labours of the hardy Canadian Horse and Newfoundland Pony. This May, Canada Post will issue two commemorative stamps to honour their much-valued contributions to our country’s settlement.

The first stamp features a Canadian Horse—a strong, sturdy creature with royal lineage and a long presence in Canada. In 1665, the King of France sent several shipments of horses to the colony of New France. Straight from the King’s royal stables, these Norman and Breton steeds were of mixed origin and included Arabian, Barb and Andalusian stock. Since they developed in isolation from other breeds, these horses eventually merged into a breed of their own, now recognized as the Canadian Horse.

Because of its resilience in the face of harsh weather conditions, the Canadian Horse outworked and outlived larger breeds of horses—a feat that earned it the nickname, “The Little Iron Horse.” Though threatened with extinction in the late 19th century, efforts were made to preserve the breed. In 2002, the Government of Canada honoured the Little Iron Horse’s legacy by declaring it the national horse of Canada.

A Newfoundland Pony, historically considered the all-purpose pony, trots onto the second stamp. This pony’s presence in Canada dates pack to the 17th and 18th centuries, when English settlers to New Founde Land brought along many breeds of ponies to help out on the rugged terrain. These hardy creatures adapted to the harsh climate of the North Atlantic, and over time, they interbred and merged into a common breed, now recognized as the Newfoundland Pony.

Since the onset of modern technology, which took over the jobs once performed by the ponies, their populations have plummeted drastically. To protect this historic creature, the Newfoundland Government declared it a Heritage Animal in 1997.

The commemorative stamps that honour these creatures feature photographs of the horse and pony alongside silhouettes that speak to their labours during Canadian settlement. “Both species are recognized for their strength, and, despite their small statures, they’re known to endure harsh environments,” explains Wilson Lam, Creative Director at Wilco Design in Toronto. “The silhouettes, which meet when the stamps are put together, capture these qualities by showing them at work.”

Both species are also celebrated for their personable, sociable and intelligent personalities. “The enlarged views of the horse and pony heads, which highlight the beautiful details and character of their facial features, really bring out their approachable and friendly nature,” explains designer Bonnie Yam. Meanwhile, the faint and subtle backgrounds suggest the origins of the two creatures—the Canadian Horse in Quebec’s colourful autumn meadows, and the Newfoundland Pony in a crisp, winter Newfoundland landscape. Yam elaborates, “The two different seasons remind us that these horses and ponies were relied on year-round.”