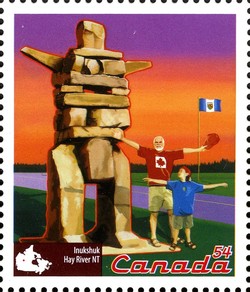 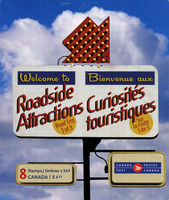 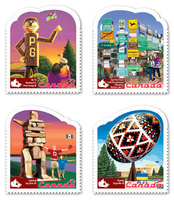 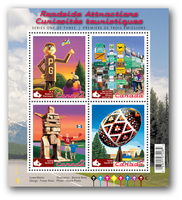 Nothing beats a Canadian road trip. From the rocky splendours of the west, through spectacular stretches of alpine meadows, towards the sweeping ocean vistas of the east—it seems that, no matter which way we steer the wheel, there’s something to see. But it’s not all natural scenery; the landscape abounds with quirky landmarks that capture the spirit of small-town Canada and never fail to get tourists talking. This July, Canada Post will issue the first set in a three-year stamp series showcasing Canada’s famous roadside attractions.

We kick off our cross-country journey in the wonderful west, home to vistas of snow-peaked mountain ranges, panoramic seascapes, and, of course, Mr. PG. At a staggering 8 metres tall, this giant “log” man is hard to miss. He’s been welcoming visitors to Prince George, BC, since 1960.

Next stop: Watson Lake, YK, where a special kind of forest—a signpost forest—is nestled within spectacular stretches of untamed wilderness. It all began in 1942, when a homesick U.S. Army G.I. working on the Alaska Highway put up a sign pointing the way and showing the mileage to his hometown. Others followed suit, and the Watson Lake Signpost Forest’s count today exceeds 64,000 signs.

So many signs—which way to go? We follow the eastbound arrow until, as luck would have it, we stumble upon Hay River, NWT’s Inukshuk. Built in 1978 as a symbol for the Arctic Winter Games, this stunning sculpture belongs to the age-old Inuit tradition of building stone giants to guide travelers through Canada’s vast landscape. Our guide points south, and on we go.

A long journey down the Yellowhead Highway leads us to Vegreville, AB, where a massive Easter egg—the largest in the world, in fact—is on display at the entrance to Elk Island National Park. Its name, Pysanka, is Ukrainian for “Easter egg,” and it symbolizes Vegreville’s vibrant folk culture.

This set of stamps is as fun and whimsical as the attractions they celebrate. Designer Fraser Ross of Halifax’s Semaphor Design Company notes, “They’re all iconic in their own way, so we wanted to give them each a monumental quality.” The stamps feature traditional oil paintings by Nova Scotia artist Bonnie Ross. The detail and dimension within them was captured by adding layer upon layer of graduated colour. Meanwhile, the lively colour scheme lends a cartoonish aspect to the scenes. Fraser adds, “This quality highlights the originality and quirkiness of these attractions; they’re so much fun and we wanted the stamps to speak to that.”

While getting acquainted with the roadside attractions, Ross came to see that their excitement extends well beyond their quirks. “They’re like historical landmarks in both a literal and figurative way,” he says. “They literally mark a location, but they also mark a time and place. On family vacations, we all stop; we stare; and we rarely leave without a picture. Over time, we may forget the details of a vacation, sometimes even the destinations themselves, but somehow the roadside attractions we meet along the way find a permanent place in our memories and photo albums.” This July, these lively landmarks can also find a permanent place in your stamp collection.

Where will the road take us next? Stay tuned to find out!