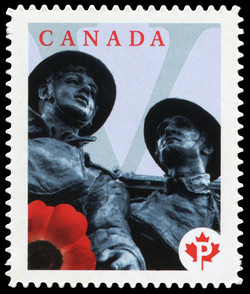 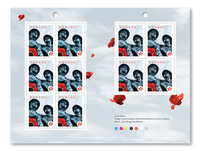 In Flanders fields the poppies blow
Between the crosses row on row,
That mark our place; and in the sky
The larks, still bravely singing, fly
Scarce heard amidst the guns below…
Lieutenant Colonel John McCrae, “In Flanders Fields” (1915)

Every year on the 11th hour of the 11th day of the 11th month, we share a moment of silence to honour the memory of the men and women of Canada’s Armed Forces who have given the ultimate sacrifice for our country. This tradition provides an opportunity to express our collective sense of sorrow for the loss that war produces, as well as a chance to rejoice in the legacy of peace and freedom that our soldiers have defended and preserved.

This fall, the spirit of remembrance will be captured on a commemorative stamp. Designed by the Toronto-based graphic design group Context Creative, the stamp features a close-up photograph of the National War Memorial in Ottawa. “We really seized the opportunity to revisit this wonderful sculpture,” says Creative Director Lionel Gadoury. “It conveys a strong sense of humanity, with people coming together from all walks of life and sacrificing for what they believe in. The sculptor, Vernon March, was very clear that it was not to be a monument to the glory of war, but to the commitment of Canada’s soldiers. We sought to convey this message on the stamp.” Gadoury elaborates, “Standing together, the two figures shown speak to the camaraderie that is the very nature of peacekeeping efforts. And by focusing on their faces instead of their armour and uniforms (which are reminiscent of the First World War), the image transcends the ages, allowing the human character of the work to shine through. Their upward glances are forward-looking and express a sense of hope—of pride in a strong nation and belief in a peaceful future.”

Vibrant red poppies are given prominence on the stamp and inside the booklet. “Thanks to Lieutenant Colonel John McCrae and his well-known poem, “In Flanders Fields,” the poppy and Remembrance Day are deeply linked in the minds of Canadians,” notes the project’s lead designer, Michael Wandelmaier. “We decided to infuse a new sense of vitality into this traditional emblem by showing real poppy flowers instead of felt pins,” he elaborates. “As a fresh, organic element, the poppy captures the feeling of renewal and hope we sought to convey. The way they’re shown blowing in the wind inside the booklet, on the other hand, speaks to the transience and fragility of life.” This dual symbolism, at play throughout the design, attests to the design group’s deep awareness of the complex nature of the subject matter they were conveying.

The signature “V” for “Victory” in the stamp’s background (also featured on Canadian nickels from 1943 to 1945) expands on the theme of hope and pride. Gadoury explains, “This graphic element is a reminder that Canada’s wartime efforts have not been a fruitless struggle; much benefit has come from our military involvement in the world.” The colour palette was also chosen with careful attention to the subject matter: red and white are the official Canadian colours, while blue brings a spiritual, contemplative quality to the design.

The booklet cover, souvenir sheet and first day cover feature photographs of the National War Memorial from various perspectives. “The monument is extremely complex; it’s as if each angle tells its own story,” notes Wandelmaier. “What results is a collection of human stories of courage and sacrifice—a phenomenal tribute to the soldiers whose commitment has made Canada the strong, respected nation it is today.”