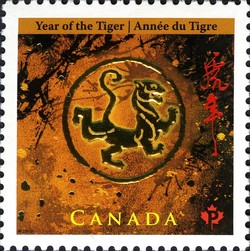 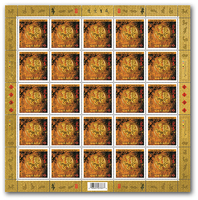 It’s that time of year again—a time to explore the enchanting world of Chinese astrology; a time to celebrate the fascinating myths, legends and traditions behind this ancient calendar system. And at Canada Post, we like to celebrate in style. This January, we’ll kick off the Year of the Tiger with a commemorative issue that’s as bold and fierce as its namesake animal suggests.

The stamps, which mark the second release in a twelve-year Lunar New Year series, were designed by Wilco Design in Toronto. “The Year of the Tiger issue is a cross-cultural celebration of the tiger figure in the Chinese tradition,” says the firm’s principal, Wilson Lam. “This project has been guided by a desire to tell the story of the tiger through traditional Chinese icons and imagery.”

A Chinese seal, a stamp used as a form of signature, is featured on the international stamp, while its imprint, portraying the tiger in a traditionally stylized manner, appears on the domestic stamp. The seal was designed by Lam and sculpted by Chinese-Canadian artist Bill Lau, using Sculpey polymer clay. “Seals are often so well-crafted that they act as cultural artifacts in themselves. In the design, the seal works to establish a visual theme that delivers both a two-dimensional icon and a three-dimensional object,” Lam explains. “We applied gold foil to the seal’s imprint, because 2010 is dominated by the metal element and gold is the highest-valued metal in China.” A symbol of wealth and good fortune to the Chinese, the colour gold speaks to lunar hopes of good luck and prosperity. Clear foil and multi-level embossing techniques were applied to draw attention to the seal, notes Alain Leduc, Manager of Stamp Design and Production at Canada Post. “These features combine to catch the light and really give prominence to Lau’s sculpture,” Leduc points out.

The fierce tiger, painted by Lam and featured in the background of the souvenir sheet, illustrates the status of the tiger in Chinese lore. “In China, the tiger is at once a figure of power and of obedience,” says Lam. “Tigers are respectful of their culture, community, and the authority of their tradition. They represent values that have helped guide generations of people into prosperity, while promoting a cohesive culture.” The long, scroll-like shape of the souvenir sheet—a format that will remain standard throughout the series—is also rooted in Chinese tradition, as decorative scrolls are believed to have originated in China.

A detailed look at the uncut press sheet reveals an abstract, forest-like pattern, against which all twelve animals of the lunar cycle have been imprinted. “We did not focus exclusively on the tiger, but placed it among the other lunar animals to present it as a commanding presence within the twelve-year cycle,” notes Lam. Speckles of foil are scattered throughout the background of the press sheet. Alain Leduc explains, “This gives the impression that gold flakes have been splashed across the surface, and the random spreading of foil is something we’ve never done before.” The feature was inspired by the works of Gustav Klimt (1862-1918), an Austrian painter celebrated for his elegant use of gold foil.

“Year after year, it can be challenging to develop a new Lunar New Year issue that blends well with the series, while being completely original in its approach,” notes Leduc. This commemorative issue, with its rich use of colour, insightful design, and leading-edge printing techniques, was nothing short of a success. Happy Year of the Tiger!