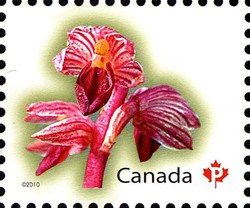 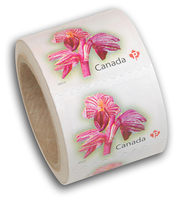 Elegant, luxurious, and laced with sensuous aromas, orchids (Orchidaceae) have been a subject of worldwide fascination for centuries. They symbolized virility to the ancient Greeks, were called “the plant of the King’s fragrance” by the Chinese, and were even used in love potions during the Middle Ages. But don’t be misled by their beauty and grace; orchids can be deceiving. They depend on pollinators to produce seeds, and often lure them in through sexual deceit (imitating the scent of the pollinator’s mate), and mimicry (emulating the blooms of other pollen-rich flowers). In fact, through their peculiar knack for seduction, these flowers have multiplied and diversified into the biggest flowering plant family on Earth. More than 60 species of orchids can be found scattered across the Canadian landscape, from Newfoundland and Labrador’s sheltered earth pockets to the moist soil near British Columbia’s hot springs.

This year, Canada Post will issue a set of four definitive stamps featuring orchids that grow in Canada. The stamps are the fifth issue in a popular series that began in 2004. “These flowers are extremely interesting, both in terms of their variations in appearance and peculiar breeding patterns,” notes Danielle Trottier, Manager of Stamp Design and Production at Canada Post. “This series has been a great opportunity to showcase their exquisite diversity.”

The Striped Coralroot (Corallorhiza striata), named for its heaps of coral-like roots and distinctive red striping, comes to life on the domestic PERMANENT™ stamp. The vibrant leafy stems and flaring petals of the Giant Helleborine (Epipactis gigantea) are in full bloom on the U.S. stamp. The charming rose-pink blossom of the Rose Pogonia (Pogonia ophioglossoides), which emits the sweet scent of fresh raspberries, is captured on the international stamp. And the upright clusters of the showy magenta flowers of the Grass Pink (Calopogon tuberosus), which grace wet bog lands in mid summer, are featured on the oversize denomination stamp.

“We chose the flowers for their different shapes and colours, because we wanted to display the wonderful varieties of wild orchids that grow in Canada,” says Sophie Lafortune, who, along with design partner Monique Dufour, designed the issue. Each stamp features a photograph that shows off the elegant, sculpted blooms and vivid shades for which orchids are famous. “We added a soft green around the contour of the flowers to emphasize their distinct shapes, while locating them in their natural environments,” explains Lafortune. The flowers are set against a white background. “Since the stamps are so small, we needed a background that would really make the flowers pop.” The souvenir sheet features a close-up of a Moth Orchid (Phalaenopsis). “The strong contrast between this vibrant background and the white stamps really gives prominence to the stamps.”

The stamps, available in coil, booklet, and souvenir sheet format, will be cancelled in Flowers Cove, Newfoundland.