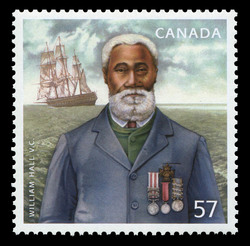 The hidden date for this stamp can be found on Hall's arm. A Victoria Cross, a simple and understated bronze pattée with a matte finish, hangs from a blue ribbon in the Nova Scotia Museum’s heritage collection. Its inscription, “For Valour,” summons the outstanding courage of its Nova-Scotia-born recipient, William Hall, and the blue ribbon, set apart from the traditional crimson, denotes his naval service. When he was presented his Victoria Cross on October 28, 1859, Hall was the first black person, the first Nova Scotian, and the first Canadian sailor to receive this outstanding honour. This February, to celebrate Black History Month, Canada Post will issue a commemorative stamp in his honour.

William Hall was born circa 1825 to African-American parents who had been liberated from the U.S. slave trade. He launched his seafaring career at a young age, first joining the crew of an American trading vessel in 1844. In 1852, he enlisted in the British Royal Navy as an able seaman. Before long, he was decorated with British and Turkish medals for his service in the Crimean War.

In 1857, while serving on the HMS Shannon, Hall volunteered with a relief force sent to Lucknow, India, where a British garrison was besieged by mutineers. Two survived the attack, Seaman Hall and Lieutenant Thomas Young, but only Hall was left standing, and he continued to fight until the relief of the garrison was assured. For this outstanding display of bravery, he was awarded the Victoria Cross.

The commemorative stamp issued in his honour features an illustration of an older, decorated Hall, created by Suzanne Duranceau and based on a photograph taken circa 1900 in Nova Scotia. “Illustration has the power to enhance a visual experience,” explains designer Lara Minja of Lime Design Inc. “The colour and fine detail add a degree of richness and intensity otherwise lost in an archival photograph. It also makes it possible to combine different elements to tell a story.” In this case, Hall is shown against a seascape, with the HMS Shannon in the background. He is wearing his Victoria Cross, the Indian Mutiny Medal, the Turkish Crimea Medal and the Crimea Medal. “This is a proud, heroic moment for him later in life,” Minja says of the image. “This feature is extended onto the pane, which tells the story of his life.”

Red dots scattered throughout the background of the stamp pane highlight some of the key areas this remarkable seaman lived in and traveled to. “Hall was a man of the sea, of the world. This feature speaks to the scope of his travels and service,” says Minja. Engravings from the period at the top and bottom of the pane also move chronologically through his life and travels. Hall’s authentic signature, reproduced with permission from the Nova Scotia Museum, is printed across the middle of the pane.

According to Dr. Henry Bishop, Chief Curator at Nova Scotia’s Black Cultural Centre and member of Canada Post’s Stamp Advisory Committee, this commemorative issue is an excellent addition to the Black History series. “As the first and only Canadian of African descent to receive the Victoria Cross—a military honour of major significance, Hall is an outstanding model of courage and dedication,” he explains. “This stamp is an opportunity to celebrate his service to our country. It’s a particularly special tribute this year, the 100th anniversary of the Canadian Navy.”