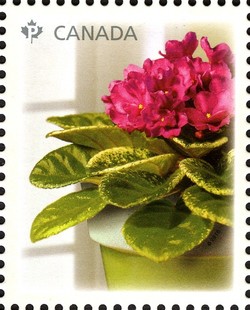 In the dark, frosty depths of a Canadian winter, when all signs of life are blanketed by snowfall, the African Violet (Saintpaulia) reminds us that all is not lost. This blooming beauty, famous for its vivid blue-to-violet blossoms and velvety heart-shaped leaves, appreciates the year-round warmth of centrally-heated homes and thrives under artificial light sources.

A tropical flower, the African Violet was first discovered in East Africa’s Usambara Mountains in 1892, by Baron Walter von Saint Paul-Illaire, a German district officer living in what is now Tanzania. He sent seeds to his father in Germany, where the plant acquired the botanical name, Saintpaulia. Today, there are 21 species, six variants and two natural hybrids of the African Violet known to growers. The genus’s seemingly endless variety includes more than 1,000 hybrids developed and registered by Canadians. Its ease of care and extensive selection considered, it’s no wonder the African Violet is the most popular houseplant in the world.

This March, two Canadian African Violet hybrids, ‘Picasso’ and ‘Decelles’ Avalanche,’ will bloom on a set of commemorative stamps. Both flowers were grown by members of the Société des Saintpaulia de Montréal (SSM).

Picasso, hybridized by Michel Tremblay, is a heavy bloomer with double flowers that are violet above and white below, with some variable white fantasy. “In violet world, ‘fantasy’ refers to the lines or dots on a flower’s petals,” explains Monique Beaucage, President, SSM. Decelles’ Avalanche was named after its hybridizer, Yvon Decelles. It has semi-double red-fuchsia star blooms and medium green and cream variegated foliage.

The first day cover features Decelles’ Caresse, also hybridized by Decelles. This spectacular heavy bloomer is a chimera. “Whereas most African Violets carry their genetic baggage in their leaf tissue, the chimera’s genes are in the flower,” explains Mrs. Beaucage. “Chimeras are special because they are quite rare. They are a natural mutation that does not result from hybridization. Rather, they’re a gift from nature.” Chimera flowers have two colours, in this case pink and white.

On the stamps, the flowers are presented in pots on a windowsill. “The idea was to show the violets as decorative indoor plants, which is how we’re accustomed to seeing them,” explains designer Isabelle Toussaint. The photographs were taken by Toussaint at an SSM show at the Montréal Botanical Garden in April 2009. She later added the pots digitally using Photoshop. “I sought to create nice, aesthetic pots that were simple enough not to overshadow the flowers.” The similarity between the two pots creates a mirror effect when the stamps are positioned side by side.

Decelles’ Avalanche is also featured inside the booklet, and Picasso is featured on the booklet cover and souvenir sheet. “Again this year, I made a special die cut along the flower’s profile to give the souvenir sheet a unique shape,” adds Toussaint.

The stamps will be cancelled in Etobicoke, where the African Violet Society of Canada will be hosting a special plant show to celebrate their 50th anniversary.