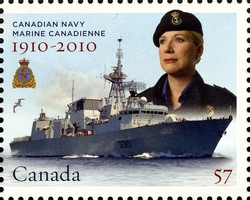 With a country as vast as Canada, it’s easy to forget we’re a maritime nation. But, bordered by three major oceans and home to the largest coastline in the world, our national development has always been shaped by the safety of our waters. For the past century, the men and women of Canada’s naval forces have stood their guard at sea, protecting our country from threats as diverse as terrorism, illegal resource exploitation, pollution violation, narcotics trafficking and illegal immigration. As the warships of Canada’s navy continue to defend our nation’s interests in home waters and around the world, Canada Post will celebrate their 100th anniversary with two commemorative stamps.

“The aim of the Canadian Naval Centennial is to build and strengthen in Canadians an appreciation for their navy and to promote the role of the navy within the Canadian Forces in a maritime nation like Canada. The theme is to “Bring the Navy to Canadians” and the issue of a set of stamps to honour this national institution is most fitting,” says Vice-Admiral Dean McFadden, Chief of the Maritime Staff. “A stamp tells a story and will create a public awareness of the role that the Canadian Navy has played both in war and in peace over the past 100 years. These stamps will be visible reminders that the country is served by men and women of the naval service who safeguard Canada and her values.”

The Naval Service Act brought the Royal Canadian Navy (RCN) into being on May 4, 1910. When the First World War broke out, the RCN had less than 350 sailors and two under-equipped warships. By the end of the Second World War, it had grown into one of the world’s greatest naval forces, with roughly 100,000 men and women and a fleet of 365 warships. Over the years, the RCN—now the Canadian Navy or Maritime Command (MARCOM), the naval element of the Canadian Forces—has served in all the major theatres of war, and has been a great source of pride to Canadians. In particular, the Canadian Navy has been a valuable component of Canada’s contribution to NATO; it has provided humanitarian relief on numerous occasions and has participated in the campaign against terrorism, and in other domestic and international maritime operations.

The commemorative stamp issue depicts the past and present of Canada’s naval service. “The two stamps were designed as separate artworks, but they appear as one canvas. They share the same painterly sky, marine life and open sea environments. The two ships, though of a different age, appear as part of the same fleet,” notes designer Andrew Perro of the Toronto-based firm, Designwerke. “One of Canada’s first warships, the HMCS Niobe, sails alongside a modern frigate, the HMCS Halifax—a feature that speaks to the passage of time, capturing the magnitude of this major centennial milestone.” The design is complimented by marine inspired colours and crisp typography.

The stamp will be cancelled in Ottawa, home to the Canadian Navy’s headquarters.