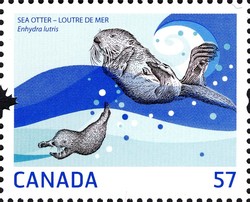 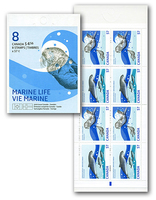 From the social and playful to the mysterious and elusive, Canada’s waterways are teeming with diverse, fascinating creatures that never fail to inspire awe and capture the imagination. This May, we’ll team up with Sweden, another country whose coastal waters abound with marine life, for a joint issue featuring the fun-loving sea otter (Enhydra lutris) and the timid harbour porpoise (Phocœna phocœna).

Though their trademark long whiskers have earned them the nickname, “old men of the sea,” sea otters (Enhydra lutris), known for their aquatic acrobatics and whimsical behaviour, seem much more like youngsters at play. The largest animal of the weasel (Mustelidae) family, sea otters typically reach about 4 feet in height, weighing in at 45 to 100 pounds. Except for the pads of their paws and the tips of their noses, they are completely covered in thick, rich fur—the thickest in the animal kingdom, in fact. Without the insulating blubber possessed by nearly all other marine mammals, this fur is essential for their survival in the often-frigid temperatures of the world’s oceans.

The shy harbour porpoise (Phocoena phocoena) is among the smallest of whales, rarely exceeding 1.5 metres or 130 pounds. Its mottled greenish-white sides fade to almost white along the belly, helping it blend well in a marine environment. Harbour porpoises are found primarily over continental shelves in Canada in two populations: the Pacific and the Northwest Atlantic. They’re also known to spend time in bays and harbours during the summer.

The joint issue was designed by Swedish freelance stamp designer Martin Mörck, who has been producing artwork for postal administrations around the world since 1978. “My idea was to join the two animals without showing their natural surroundings,” Mörck says of the design concept. “I tried to capture the animals on the same level, somewhere both in front of and behind the water, under water, and at the surface of the water, which is their shared element.” The images were engraved by Swedish master engraver Lars Sjööblom and based on photographs of the animals.

The otter and porpoise are shown in a setting of waves and bubbles. “I wanted to create a background that differed from the naturalistic three-dimensional engravings of the animals. It creates a space through the two-dimensional overlaps of the colours. I also thought it was fun to ‘go back to the seventies,’” explains Mörck. The two stamps meet when placed side by side. “The whole idea is based on the movement of the waves from one stamp to another.”

To Danielle Trottier, Manager of Stamp Design and Production at Canada Post, working on joint issues provides opportunities to bring something new to the stamp program. “It’s always great fun working with other postal administrations and tapping into their technology,” she says, noting that Sweden is a world leader in stamp engraving. “For this issue, we’ve introduced elliptical perforations, and Sweden has re-created our maple leaf perforation on the souvenir sheet using new techniques. It was also the first gummed booklet pane we’ve produced since 2004.”

Since both the sea otter and the harbour porpoise can be spotted along the Pacific coast, the issue will be cancelled in Victoria, BC.

"Working with Sweden Post was a real treat. They’re a world leader in stamp engraving, and they were able to meet our unique paper and tagging requirements. We also introduced elliptical perforations, which serve as a counterfeit prevention measure, and Sweden has reproduced our signature maple leaf perforation using new techniques."