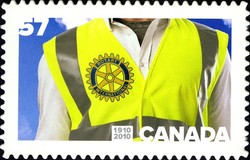 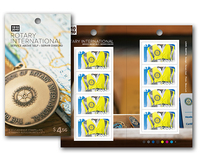 “It is a man’s job to be a good Rotarian, and he who lives up to the precepts will be a good neighbour, a kind friend, a loving husband, a companionable father, and an asset to the community in which he lives.”
Paul P. Harris, Founder, Rotary International

Oh, the simple pleasures of small-town life: the sense of fellowship and community; the warm, friendly neighbourhood ties. If only these rural values could be brought to life in the city. And so began a movement—one that was born in a backroom in Chicago and would soon send ripples of goodwill across the border and around the world.

The first Rotary Club was founded in the United States as a small businessman’s club. Spearheaded by Paul P. Harris, a Chicago lawyer, the club’s membership expanded rapidly, as did its focus; Rotarians were soon using their newfound comradeship to reach out to less fortunate members of their community.

The movement came to Canada in 1910, when the first Canadian club, the Winnipeg Rotary Club, was founded by P.A.C. McIntyre. The organization’s first officially chartered club outside the U.S., its founding marked Rotary’s transformation from a national to an international organization.

Over the years, Rotary International has grown into one of the largest and most successful service organizations in the world. With Service above Self as its motto, members of the 33,500 Rotary Clubs are volunteers who work locally, regionally and internationally to combat world hunger, improve health and sanitation, provide education and job training, promote peace and eradicate polio. This summer, Canada Post will celebrate the centennial of Rotary’s service in Canada with a commemorative stamp issue.

“Rotarians all across Canada, together with the family of Rotary that includes Interactors, Rotaractors, Inner Wheel and Probus Members, Youth Exchange Students and Rotary Scholars, are delighted that the service and contributions of Clubs are being recognized on this, the 100th anniversary of Rotary in Canada,” says Wilfrid Wilkinson, past President of Rotary International, from Cobourg, ON.

The stamp features an anonymous figure sporting the traditional Rotary vest. “My father was a Rotarian, and I always remember how concerned he was with the betterment of others, from the welfare of children, to health care and housing projects,” says designer Xerxes Irani. “These memories are all tied to the Rotary vest, and while researching the organization for this stamp design, the photographs I came across kept bringing me back to that visual. I chose it as the focus for the design because it has become symbolic of every Rotarian.” The anonymity of the figure enforces this idea; “It could be anyone,” as Irani puts it.

The first day cover and booklet feature a glimpse of a Rotarian’s personal working space, with meeting schedules, awards, and lapel pins scattered around a desk. “We wanted to make it seem as if we sneaked into a member’s home office,” explains Irani. The map on the back of the booklet is focused on Montréal, where the 2010 Rotary International Convention will be taking place from June 20 to 23.

Did you know that Rotary International has been honoured by more than 130 countries through more than 2,000 commemorative stamps, souvenir sheets and special cancellation marks?

The stamp will be cancelled in Montréal, where celebrations for the 100th anniversary of Rotary International will be taking place in June.