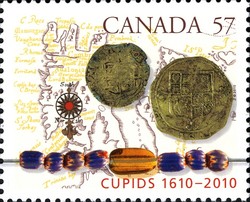 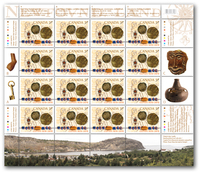 In August 1610, English colonists, sent out by the London and Bristol Company and led by prominent Bristol merchant John Guy, arrived in Cupids (then Cupers Cove) on the north side of Conception Bay on Newfoundland’s Avalon Peninsula.There, they marked the start of British overseas expansion by establishing the first English settlement in what would become Canada and one of the earliest European settlements in North America.

Evidence of the original colony was uncovered in 1995, during a survey led by the Baccalieu Trail Heritage Corporation’s chief archaeologist William Gilbert. Since then, five early-17th century structures (some of the oldest European buildings in North America) and more than 145,000 artifacts have been unearthed.

This August, Canada Post will celebrate the 400th anniversary of this historic settlement with a commemorative stamp. The stamp features a portion of a 17th century map of the Avalon Peninsula, compiled by John Mason (1586 – 1635). It’s the first English map of Newfoundland produced from first-hand observation and the first to show Cupids’ location.

The stamp also features artifacts that have been unearthed in excavations of the settlement site, such as coins, and glass and rare amber trading beads. “By focusing on artifacts, the design highlights both the commercial reason behind the settlement, and the significance of the objects just now coming out of the ground,” notes designer Steven Slipp, of Semaphor Design. “In his journal, John Guy mentions bringing some amber beads with him on his voyage into Trinity Bay,” Slipp explains. “There’s no way of knowing, but it’s possible that he handled this bead.”

“The stamp celebrates the founding and re-discovery of the birthplace of English Canada,” states Roy Dawe, Chairperson of Cupids 400 Inc. “The founding of Cupids, 400 years ago, is an important milestone in the growth of the Canada that we know today.”