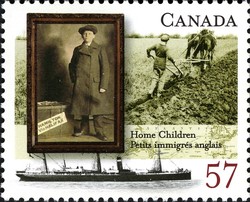 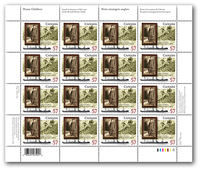 Starting in 1869, and continuing into the years following the Second World War, more than 100,000 orphaned, abandoned and pauper children were sent to Canada by British churches and philanthropic organizations, in the hope of providing them with a better life. They were welcomed by Canadian families as a source of farm labour, domestic help, and, in more fortunate cases, as children of their own. But while some benefited from the promise of a brighter future that the movement’s founders had envisioned, others were abused, neglected and overworked.

This September, Canada Post will honour the Home Children with a commemorative stamp. The stamp features an image of the SS Sardinian (a ship that carried children from Liverpool to Québec), a map symbolizing their cross-Atlantic journey, a photograph of a child at work on a farm and one of a newly arrived Home Child, standing beside a suitcase while en route to a distributing home in Hamilton, Ontario. The frame around the photo, notes Debbie Adams, Creative Director at Adams+Associates Design Consultants in Toronto, symbolizes the relationships they developed in Canada. According to Adams “It shows that someone cared enough about this child to preserve and display his image.”