The hidden date for this stamp can be found on the left end of the wave line near the middle of the stamp. Due to the high value of this stamp, it contains a number of visible security features. First off, the blue whale's scientific name, Balaenoptera musculus, is repeatedly micro-printed along the top edge of the stamp. The micro-print is very clear on the right side of the stamp and slowly fades away as it travels towards the left edge of the stamp.

Second, hidden in this band of micro-printed scientific names is a security typo. In one of the "Balaenoptera musculus" along the top, the A and E in Balaenoptera are purposefully swapped, spelling Baleanoptera. If you have a stamp where this typo is corrected, then you have found a forgery. Third, the stamp's water is printed using a micro-pattern with two colours in some places. Fourth, the denomination value is printed with a special ink that sparkles in the light. Fifth, the wave lines in the stamp are the blue whale's scientific name micro-printed onto the stamp. 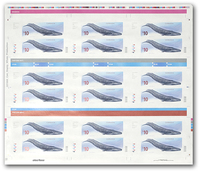 Size, power and speed, the majestic blue whale (Balænoptera musculus), king of the animal kingdom, has it all. Weighing in at between 80 and 180 metric tonnes and reaching lengths of more than 30 m, our planet has never—even in the age of dinosaurs—seen another creature this big. It can travel at speeds of 33 km/hr, accelerating to 48 km/hr when chased, making it among the fastest whale species. This fascinating giant of the deep is also unmatched in the projection of its voice, emitting low-frequency sounds that can travel hundreds of miles (and possibly entire oceans) under water. Yet despite its outstanding stature and might, sightings of the elusive blue whale are very rare—another reason why it has fascinated us since the dawn of time.

Canada is home to two populations of the blue whale. The Atlantic population roams the waters off eastern Canada, along the north shore of the Gulf of St. Lawrence in eastern Nova Scotia, the south coast of Newfoundland, and in the Davis Strait between Baffin Island and Greenland. Pacific populations are located off Canada’s west coast.This October, Canada Post will issue a $10 high-value definitive featuring a blue whale. Thestamp is the newest addition to our popular Canadian Wildlife series, which includes a grizzly bear ($8, 1997), a loon ($1, 1998), a polar bear ($2, 1998) a moose ($5, 2003), a white-tailed deer ($1, 2005), an Atlantic walrus ($1, 2005), a Peregrine falcon ($2, 2005) and a Sable Island horse ($2, 2005).

Like the wildlife definitives that preceded it, this stamp was produced using a combination of three printing techniques: intaglio (for the whale in the foreground) and offset lithography (for the colours in the background). Alain Leduc, Manager of Stamp Design and Production at Canada Post, elaborates, “The intaglio process (which was used to produce Canada’s first postage stamp) was recently reinvented using a new, state-of-the-art laser engraving technology.” The image of the whale is the work of master engraver Jorge Peral and was based on an illustration by Suzanne Duranceau.

“This is both the biggest stamp and highest stamp denomination Canada Post has ever produced,” notes Leduc. “We thought this made a fitting tribute to the largest creature in the animal kingdom.” He explains that he looked to prior issues in the Canadian Wildlife series to determine the size. “Since the largest stamp before it was the grizzly bear, we decided to double its length.”

“Due to the stamp’s high value, we wanted to introduce as many security features as possible in order to prevent fraud,” says Leduc. Though determined to keep some of these features secret, he notes that a few were created using intaglio and invisible “tagging” inks. For example, microtype was used to write the Latin name for blue whale—a feature that is impossible to reproduce by any other means than intaglio. Additionally, a large cluster of krill (the whale’s food of choice), along with a diver, were introduced using tagging inks. “Looking at these stamps with a black light introduces a whole new dimension to the design.”