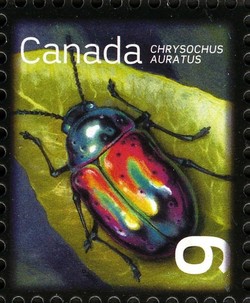 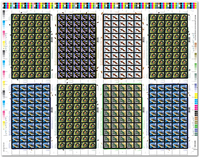 They skitter, scamper, and sometimes sting; we call them bugs for our own reasons. But, as any veteran gardener will tell you, one person’s pest is another person’s helper.

In 2007, Canada Post paid tribute to the beneficial insects that roam Canada’s gardens and marshes with a set of low-value definitives featuring the golden-eyed lacewing, the cecropia moth, the convergent lady beetle (better known as the lady bug), the northern bumblebee and the Canada darner. Last year, the monarch caterpillar joined the ranks of these useful critters, squirming onto a 2-cent stamp of its own. And once again this fall, Canada Post will celebrate five more of nature’s tiniest helpers: the paper wasp (Polistes fuscatus), the assassin bug (Zelus luridus), the large milkweed bug (Oncopeltus fasciatus), the margined leatherwing (Chauliognathus marginatus) and the dogbane beetle (Chrysochus auratus).

Each of the insects featured is a wonder to watch at work in the garden. There’s the paper wasp, chomping away on caterpillars and other gardening pests. Another “exterminator,” the assassin bug, uses its beak to suck the bodily fluids from its soft-bodied victims. Wildflower gardeners and farmers may appreciate the large milkweed bug for feeding on the juice from milkweed seeds, as well as the larvae of dogbane beetle for feasting on the same plant’s roots. The margined leatherwing larvae should also be prized for consuming a range of harmful insects.

According to designer Keith Martin of the Vancouver-based Signals Design Group, this stamp project provided the chance to “unleash a new bug fest,” as he so enthusiastically puts it. Martin speaks of the insects with an energy that is keenly reflected in the stamps. “Try as I might, I could not get these guys to behave!” he playfully laments of the infestation of insects that squirm across both the pane and the first day cover.

“The more I thought about bugs, the more I delighted in their seeming lack of a ‘right side up,’” Martin explains. To capture this peculiar trait, he positioned them in a variety of orientations. He continues, “I also wanted to touch on the contrast between the first issue, which focused on insects often spotted in the sky, and this one, which is centered on plant and ground-dwelling bugs.” The leafy, garden-inspired backgrounds of the stamps speak to this feature. Martin adds that light plays a special part in the design. “The choice of lighting was as integral as deciding which background to use in each stamp. For example, a strong light source on the assassin bug allows its cast shadow to define it against the active background of that stamp, while the flat light on the large milkweed bug creates a parallel between the flower’s abstract triangular forms and the shapes of the bug’s markings.”

Martin notes that each bug catches the eye for its own reasons, from the dogbane beetle’s iridescent glow to the large milkweed bug’s stark graphic shell. “But I think the one aspect that was true of all these critters was the need to ‘show some leg,’” he adds. “There was no getting around it; in the bug fest that is the beneficial insect series, this group would definitely make up the chorus line.”