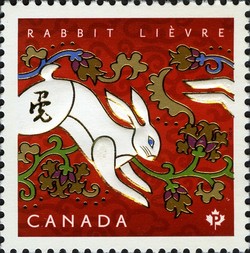 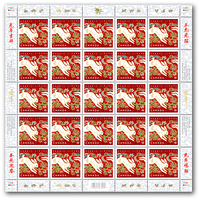 Do you feel a state of calm coming over you? The Year of the Rabbit is a peaceful year, one that will be far more tranquil than the previous “Tiger” year, and give us the necessary rest to revive ourselves from a time of uncertainty and stress.

The Year of the Rabbit is the fourth in the cycle of the Chinese New Year, occurring every twelve years. It begins on February 3, 2011, and runs until January 22, 2012.

People born in the Year of the Rabbit have exceptional taste. They are gifted, expressive and value a sense of honour. When it comes to making a match, they should gravitate to those born under the sign of the Ram, Pig, or Dog. The Rabbit will be unable to cope with the arrogance and criticism of the Rooster, their patience will be exhausted by the tantrums of the Tiger, and for them, the Horse is too hot tempered and fickle. Rabbits don’t need the grief. They are survivors—and can deal with anything life throws at them as long as they are at peace with themselves.

As in keeping with Canada Post’s second series of Lunar New Year commemorative issues, January 7th will see the release of both a domestic and international stamp, as well as related collectibles, in celebration of the Year of the Rabbit.

According to Stamp Design Manager Alain Leduc, for designers, the Lunar New Year issue is one of the most challenging produced by Canada Post. “There’s the need to come up with a design that’s as multi-dimensional and powerful as the previous, but also something very different from the past stamps in the series—as well as a design that will work with the structure that has been determined for this second series. With the Rabbit, I think Paul Haslip and HM & E Design have done a brilliant job of doing just that.”

Paul Haslip, partner at HM & E Design, states that seeing this issue through to completion feels like crossing the finish line in a marathon. “It was an incredible journey”, notes Paul. “This issue has been so much a part of our lives for 18 months and was one of the most daunting, exhilarating and exhausting yet satisfying projects in which we’ve been involved.” Paul, in recounting the process of zeroing in on the central image of the Rabbit on the domestic stamp, says, “Finding a unique yet simple way of visualizing the rabbit was our starting point. While the rabbit is not as dramatic as the tiger or the snake, it does leap over obstacles. A hopping rabbit was a unique way of visually connecting one stamp to the next on the domestic series. Each stamp has the hind legs of the rabbit from the next stamp and so on.”

“With the scope of this project, there were many details and so much to keep in mind. It was too, a team effort,” says Paul. “Embracing, acknowledging and encouraging the indispensable contributions, support, suggestions and observations of each team member yet remaining true to a constantly evolving vision was truly challenging—but the end result is better for it.”