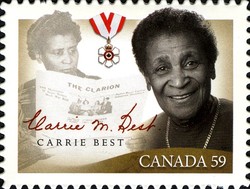 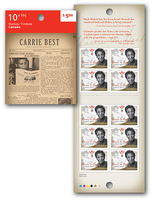 Born in New Glasgow, Nova Scotia, on March 4, 1903, Carrie Best came into a world where the odds were stacked against a woman of colour. When she passed away in 2001, her work as a poet, author, journalist and fearlessly determined activist had done much to bring positive change to black Canadians.

In 1946, a black woman named Viola Desmond mistakenly sat in the “whites-only” section of a theatre, and was arrested, convicted and fined. Earlier that year, Best had established The Clarion, one of Nova Scotia’s first newspapers for Black Canadians. Together the two women lobbied the provincial government to repeal its segregation laws, which it did in 1954.

In 1954, Best’s radio program, The Quiet Corner, hit the airwaves. From the late 1960s to 1975, she wrote a column on human rights for the Pictou Advocate and spoke out against, among other things, substandard conditions on native reserves and discrimination against black property owners.

Carrie Best, a role model for generations of black Canadian women, was a Member of the Order of Canada and served on the Task Force on the Status of Woman. She was awarded the Queen Elizabeth Medal, several honourary doctorates, and many other awards.

Designer Lara Minja, of Lime Design, in Victoria, BC, notes “The determination, strength, integrity and pride of Carrie Best are the attributes I aspired to bring to this stamp. The design balances a more recent depiction with an image from the past. Carrie Best smiles warmly in her portrait, sitting opposite an image of herself reading the newspaper she established. This stamp incorporates an Order of Canada icon, as well as the name and signature of Best to personalize the design.”

According to Stamp Design Manager, Liz Wong, “In previous Black History issues, due to the eras in which our subjects lived, usable photographs were simply not available. We were limited to an illustrative approach. Best was of a younger generation, so we could choose from a far richer range of imagery.”