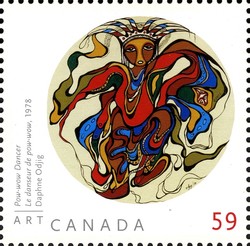 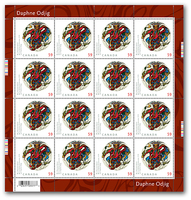 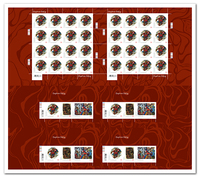 A Canadian artist of Aboriginal ancestry, Daphne Odjig was born September 11, 1919, and raised on the Wikwemikong Unceded Indian Reserve on Manitoulin Island (Lake Huron), Ontario. Her father, Dominic Odjig, and her grandfather, Chief Jonas Odjig, were Potawatomi, descended from the great Chief Black Partridge. Her mother, Joyce Peachy, was an English war bride. Her family migrated north and settled in Wikwemikong after the War of 1812. The Potawatomi (Keepers of the Fire) were members, along with the Ojibwa and Odawa, of the Three Fires Confederacy of the Great Lakes.

Both athletic and musical, Daphne was an avid student at the Jesuit Mission in Wikwemikong. Her favourite subject was art and she would spend time sketching with her father and grandfather, both of whom also had artistic ability. She also helped her mother design needlepoint patterns for linens for the church. Unfortunately, in 1932, when she was in grade seven, her formal education was cut short when she developed rheumatic fever and suffered a long illness.

After losing her mother and grandfather just weeks apart, Daphne and her brothers and sisters went to live with their grandmother in Perry Sound, Ontario. Here, for the first time in her life, she felt the sting of racism and that her options were limited due to her last name and her native appearance. To counter these problems, she and her sibling changed their last name to “Fisher,” the name still used by two of her brothers.

Like many young women of her generation, Odjig moved to Toronto during World War II, where factory jobs were plentiful and easy to obtain since employers had lost much of the male workforce to the war effort. She began to frequent the art gallery at the Eaton’s College Street store, the Royal Ontario Museum and the Art Gallery of Toronto (now the Art Gallery of Ontario). Over the next decade, she would teach herself how to paint.

At the end of the war, Odjig married Mohawk/Métis war vet Paul Somerville and moved to Coquitlam, British Columbia, with her new husband and his young son David. She gave birth to son Stanley in 1948. Even as a young mother, she found time to explore her art and experiment with oils on homemade stretchers and tent canvas, at the time painting naturalistic landscapes. She developed an interest in Cubism and Abstract Expressionism, learning the techniques of the Modernists from books and magazines. However, tragedy struck in 1960, and widowed, she became the sole caretaker of the strawberry farm she had owned with her husband, tending the farm in summer, then in winter, painting and spending time at the Vancouver Museum of Art to study brush strokes up close. Influenced by the Impressionists, she experimented with light effects, broken brush strokes and Cloisonnism, and took top honours at her first juried show.

In 1964, Odjig met the elder women of the community at the Wikwemikong Pow-wow and learned about the old Nanabush tales, which she later painted. An exhibit of this collection was seen by then Prime Minister Lester B. Pearson, an encounter which led to it being purchased in its entirety by the Federal Department of Cultural Affairs.

A few years later, Odjig made her first private sale and in 1967, her first solo exhibition, of 78 pieces, which showed at the Lakehead Art Centre in Thunder Bay, Ontario. The following year, she accepted a commission to paint a series of erotic illustrations for Tales From the Smokehouse. Meeting Bernard Polly, an art instructor at Brandon University was a significant turn in Odjig’s career. From Polly, Odjig learned collage techniques and began a series of mixed media collages incorporating natural materials. A looser, expressionistic style began to emerge in her work. In 1973, Daphne Odjig cofounded the Professional Native Indian Artists Inc., often referred to as the “Indian Group of Seven,” which included Norval Morrisseau, Alex Janvier, Joseph Sanchez, Jackson Beardy, Eddie Cobiness, Carl Ray and herself.

Many more commissions followed, as well as exhibits with private galleries and finally, a solo show at the National Gallery of Canada, the first of its kind by a First Nation woman artist.

Daphne Odjig has been extensively awarded, receiving seven honourary degrees, the National Aboriginal Achievement Award, the Order of British Columbia and both the Order of Canada and the Governor General’s Laureate, Visual and Media Arts, Canada’s highest honour in the field of visual arts. On her work being chosen as the subject for this stamp series, Odjig says, “I am pleased and honoured to once again have had my art selected for an issue of my country’s postage stamps. I am proud of my First Nations heritage and equally proud of being Canadian. It is my hope that these images of my paintings may help create a vision of the unique possibilities within Canada, for us all, and particularly for our youth.”

This Art Canada issue celebrating her work includes three paintings representative of her powerful style: Pow-wow Dancer (1978, acrylic on canvas), Spiritual Renewal (1984, acrylic on canvas) and Pow-wow (1969, acrylic on board). According to designer Hélène L’Heureux, “Each painting is totally different from the other two. But they are all so very much Odjig’s work, they represent the whole of what her work has been about over the years. The trick was in finding a way to frame such diverse pieces to bring a sense of unity to all three stamps.”

Stamp Design Manager Alain Leduc echoes that sense of diversity. “Odjig draws her ideas from a vast range of sources—she paints legends, she paints erotica. She’s open to a wide range of inspirations and subject matter, which she makes her own.”

The decision to create three stamps for this edition of the series, which in the past has been done only for the Karsh issue of 2008, was made for both aesthetic and practical reasons. In addition to providing collectors with three unique examples of Native Canadian art on stamps, the U.S. and International stamps fulfilled necessary operational requirements.